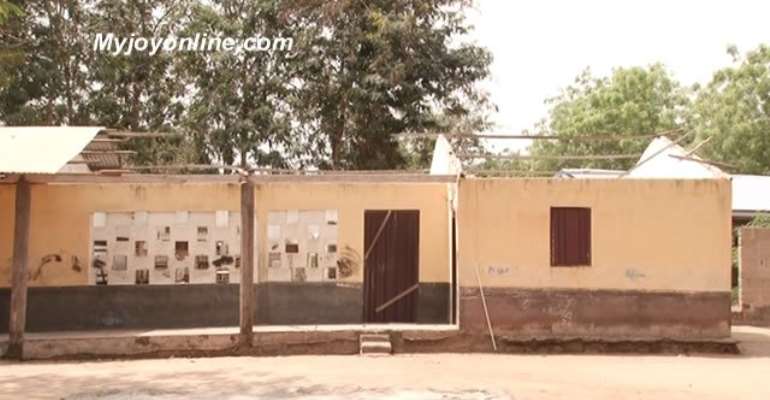 More than one year after rainstorm destroyed the roof of some schools in the Central Tongu District of the Volta Region, the classrooms are yet to be renovated.

This has forced the pupils to learn under trees and in crowded classrooms.

Teachers say this is hampering academic work. School authorities complain efforts to get government to renovate the blocks have proved futile.

In February 2015, a heavy storm blew off the aluminum roof of a three unit classroom block belonging to the Mafi Seva M/A School.

With the support of the community, school authorities used 5000 cedis of the school’s resources to re-roof portions of the block.

The residents say they have run out of money and are unable to renovate the rest.

Some of the children now take lessons under a tree, while others have had to join another class, creating a crowded teaching and learning environment.

“Some classes are under trees and the rest, we are managing – and because in a class of two, a teacher cannot teach both classes, we are deteriorating in educational qualification,” headmaster of the school Mr. Agbadzi told Joy News.

Assembly member for the area, Julius Karl Fieve told Joy News efforts to get the District Assembly to support the school’s renovation has proved futile.

“We went to meet the MP for Central Tongu (Joe Gidisu), we later also went to NADMO, District Assembly… assurances upon assurances were given, but nothing fruitful came out of these engagements,” Mr. Karl Fieve said.

This is not the only school facing this problem. The roof of the KG block of Mafi Wudzrolo M/A school was also blown off. The children now learn in a flimsy structure – a shed. The result is children are unable to concentrate in class.

“Because we don’t have walls around the class, when there are passing vehicles, the children tend to observe them, lacking concentration on their studies,” a teacher told Joy news.

School officials are appealing to government to support the schools.

Below is the video of the story.