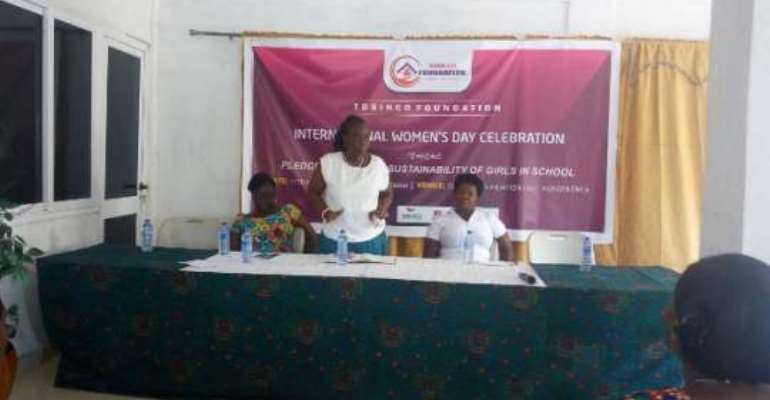 Accra, March 22, GNA - The Tobinco Foundation has enlightened basic school girls in Accra, on the importance of doing away with all kinds of excuses to show less interest in studies and the welfare of their future.

Mrs Grace Serwaa Manu, Former Principal of Pentecost Vocational Institute, Gbawe, who was the Guest Speaker at the mentoring programme said: 'It is only when you fail in life especially in education that you find excuses to defend yourself such as my parents couldn't sponsor me, I couldn't attend a good school.'

She said this during the celebration of the International Women's Day on the theme: 'Pledge for parity,' organised by the Foundation.

She also told the girls that education helps one to be abreast of technological, social, and intellectual skills.

The Guest Speaker asked the girls to be determined, humble and religious to make it in life.

Mrs Millicent Akoto, Executive Director of the Foundation said there has been slow progress in women's growth in many places across the world.

'This not withstanding there are still more places where women are marginalised, which calls for urgent action to ensure parity between women and men,' she said.

She also noted that many girls drop out of school either due to teenage pregnancy, lack of support from parents or guardians, peer pressure and lack of role models.

Mrs Akoto said the Foundation therefore found it necessary to bring together 50 female students from both public and private basic schools in the Ayawaso Central Municipality, to interact with women who are social experts and also start a mentoring process to help the pupils realise their goals and future aspirations.

The Executive Director noted that the Foundation organised the mentoring programme on the theme: 'Sustainability of Girls in School,' due to the just ended annual health review for Greater Accra Region, where Dr Linda Van Otoo, Regional Director of Health revealed that 10,000 teenage pregnancy cases were recorded in 2015.

She therefore explained that the programme is to have the girls pledge to attain the highest educational ladder after exposing them to professions they could pursue.

Mrs Akoto disclosed that the role modelling and mentoring session initiated with the girls on the International Women's Day would be continued and nurtured to become a Girls' Club with the aim of guiding members to go through various higher educational institutions and attain higher social statuses in future.

The Foundation among other things supports vulnerable groups, the aged, and people living with disabilities as well as those with strange medical conditions who cannot bear the cost treatment.

The Foundation generally works in the area of Education, Health, Livelihood and Economic Empowerment and Social Safety.