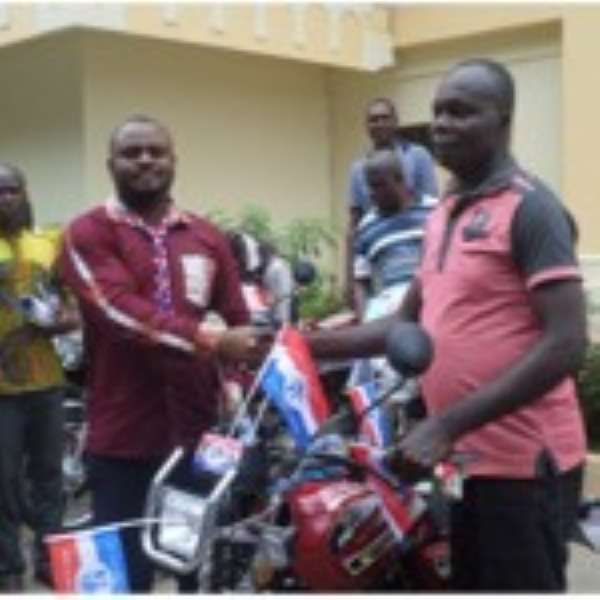 The Constituency chairmen and their organizers received the items on behalf of their constituencies at a brief ceremony at Sunyani on Sunday. The donation was witnessed by some regional Council of Elders members and the deputy national organizer, Kweku Darteng.

According to Rashid, this first of package of motorbikes are for orphan constituencies, that  is constituencies that do not have sitting members of parliament but subsequent ones will reach all the 29 constituencies in the region.

Addressing party executives from the constituencies before handing over the gifts, Rashid said the donation was in fulfillment of promises he made to party members during his campaign to be elected as B/A Regional Organizer of the party. He said during his rounds through the constituencies in the region, he realized most of the constituencies faced a lot of problems including means of transport so he promised to empower them to enable them go round villages and communities to campaign for Nana Akufo-Addo to win the 2016 elections to restore hope to Ghanaians who are suffering from the bad governance of the Maham-led NDC administration.

He entreated the constituency organizers not to see the bikes as their personal properties but as the party's own to enable any member of the party use it for the party's good cause.

The deputy national organizer, Kweku Darteng, who witnessed the handing over, promised party members that nobody's hard work in the party will go unrewarded when the party comes to power. He urged the receivers to work hard to bring the party to power for the relief of all Ghanaians.

A former minister of local government in Kufour administration, Adjei Darko advised both national and regional executives to always take inventory of all donations that come to the party so that the items do not become individual properties after elections.