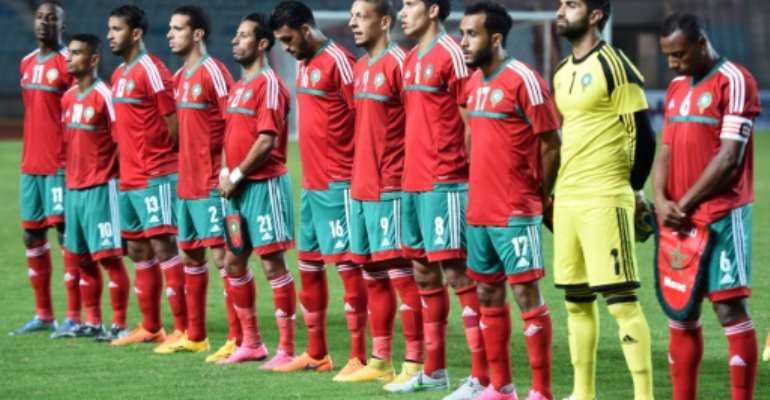 Morocco's national football team players pose for a photo ahead of their 2016 African Nations Championship qualifying match against Libya, in Rades Olympic Stadium outside Tunis, in October 2015. By Fethi Belaid (AFP/File)

A seven-day, 50-match schedule starts Wednesday and the co-Group F leaders meet in Praia Saturday and in Marrakech Tuesday in key matches as only mini-league winners are guaranteed places at the 2017 tournament in Gabon.

Hassan Shehata coached Egypt to three consecutive titles between 2006 and 2010, but only Renard has won the Cup of Nations with different countries.

His successes in Africa contrast with failures in France. He could not prevent Sochaux being relegated and a second Ligue 1 stint ended this season with Lille sacking him.

Given that Morocco are ranked only 19 in Africa, Renard has been set a tough target of at least reaching the 2017 Cup of Nations semi-finals by his new employers .

And while some pundits remain sceptical as to whether Cape Verde are the strongest African national football team, they are chasing a third consecutive Cup of Nations appearance.

Like Morocco, Cape Verde will have a new coach with local Felisberto 'Beto' Cardoso succeeding Portuguese Rui Aguas, who quit after not being paid for seven months.

Cape Verdean football officials said the salary was supposed to be paid by Portugal under a development and co-operation agreement between the countries.

Former assistant coach Cardoso will rely heavily on Djaniny and Heldon for goals while Moroccan sharpshooter Youssef El Arabi bagged a brace in Spain at the weekend.

Renard has successfully persuaded France-born Lille midfielder Sofiane Boufal to play for the country where his parents were born.

Other high-profile showdowns involve Nigeria and Egypt in Group G and Cameroon and South Africa in Group M.

Nigeria, who have home advantage first, are another team with a new coach as Samson Siasia took over when Sunday Oliseh quit following a social media rant against his critics.

Those called up for the Super Eagles include teen Alex Iwobi, whose first English Premier League start for Arsenal was crowned by the second goal in a 2-0 weekend win at Everton.

Egypt, whose three titles in a row were followed by failures to qualify for the last three tournaments, beat Tanzania and Chad convincingly to lead Nigeria by two points.

Bafana Bafana (The Boys) were held by Gambia and lost to Mauritania, leaving them bottom of the table and five points adrift of the Indomitable Lions.

Another African in the running to play for the first time since the last World Cup is United States-based Ghana goalkeeper Adam Kwarasey.

The Group H leaders will lack injured midfielder Andre Ayew against bottom-of-the-table Mozambique, but younger brother Jordan is among the strikers chosen by coach Avram Grant.

Home and away fixtures against lowly-ranked Sudan offer defending champions Ivory Coast a realistic chance to win in Abidjan and Khartoum and build a four-point Group I lead.