Akufo-Addo saddened by Jake's death: 'I will miss him' 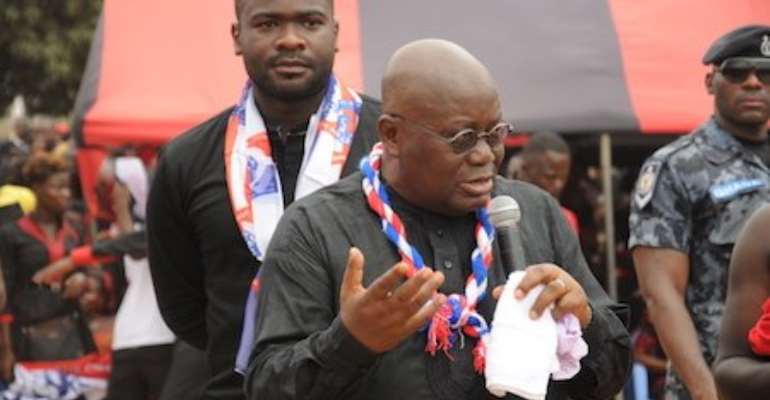 Akufo-Addo remembers the late former party Chair "as gregarious and fun-loving man, with an exceptional sense of humour.”

Jake died Sunday in a hospital in London. He was 70.

I am deeply saddened and distraught by the news of the death of my lifelong friend, Jake Otanka Obetsebi Lamptey, which sad event occurred in the early hours of today, Palm Sunday, March 20, in London, in the United Kingdom.

The death of a friend of long standing brings up so many emotions – grief, sense of loss, reflections on friendship, the stark reality of mortality, and the presence of the Living God. Indeed, Jake and I grew up together and forged a close friendship in our childhood, very similar to that our fathers shared, which led to the significant roles they both played in the formation of the United Gold Coast Convention (UGCC), the movement that initiated the struggle for Ghana’s freedom and independence. They were both members of the legendary Big Six of Ghanaian history. The UGCC is the mother party of the New Patriotic Party (NPP). The ties between us were considerable.

As a founding member of the NPP, Otanka, Jake to others, first served as Chairman of the Publicity Committee of the Party in 1992, and subsequently rose to the position of Greater Accra Regional Chairman. Candidate J.A Kufuor appointed him as his Campaign Manager in the successful election campaign of 2000. Again, in 2004, he was appointed Campaign Manager by President John Agyekum Kufuor in the campaign that led to the NPP retaining power that year. He served as President Kufuor’s first Minister for Presidential Affairs and Chief of Staff, and then subsequently as his Minister for Tourism and Modernization of the Capital,and also as his Minister for Information. Colleagues in the NPP government will readily attest to the dedication and selflessness with which he served Mother Ghana. His love for the party and desire to see the NPP regain power resulted in his election in 2010 as National Chairman of the NPP, but lost his bid for re-election in 2014.

Undoubtedly, he made an immense contribution to the NPP and to Mother Ghana. A proud Ga, he was an honest, patriotic and distinguished son of Ghana, whose loyalty to Ghana was unalloyed, and who never wavered in his adherence to the values and principles of the Danquah-Dombo-Busia tradition, which was, for him, the noblest tradition in Ghanaian politics. Hewas, nevertheless, to his credit, a tolerant and responsible person who made many friendships across the political divide of our country.

A gregarious and fun-loving man, with an exceptional sense of humour, I will miss him immensely. I am confident all true devotees of the NPP and well-meaning Ghanaians will miss him too.

A man with strong family values, I extend my deepest condolences and sympathies to his dear wife, Esther, and their children.

May the soul of Jake Otanka Obetsebi Lamptey rest in perfect peace in the bosom of the Almighty until the last Day of the Resurrection when we meet again.