Minister Otabil, A Lot Of Things Don’t Make Sense To Me Either 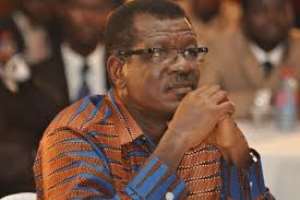 The latest craze and rage has been for many a Ghanaian cleric to pick on the pre-scriptural innate and human practice of homosexuality and assert that it is a depraved human cultural expression that points to the ominous devolution of society into abject moral decadence. But, of course, even charismatic and erudite Ghanaian preachers and inspirational speakers like Pastor Mensa Otabil are fully and perfectly aware of the fact that homosexuality is nowhere nearly among the most worrisome problems of our nation and society at large (See “Same-Sex Marriage ‘Doesn’t Make Sense’ – Otabil” Classfmonline.com / Ghanaweb.com 2/14/16).

Even the very pathologically patriarchal concept of the Holy Trinity, a patently Christocentric ideology of Glorified Homosexuality, does not make sense, nevertheless, the Church has been able to perfectly live with it for nearly two millennia (2,000 years). What is even more interesting is the fact that whenever such logical incongruity, particularly where the fundamental question of human procreativity as an existential principle has been pointed out by astute African traditionalists, both modern-schooled and unlettered, the tendency has been for clerics like Dr. Otabil to glibly parry off such questions as one that is coming from minds woefully lacking in subtle or sophisticated understanding of Divine Mysteries. This is where the entire problem of cognitive dissonance emerges, when it comes to a discursive engagement of the otherwise patently normative subject of homosexuality.

In other words, our Church leaders and thinkers have absolutely no problem preaching the biologically illogical theology of the Trinity; they are even pontifically defensive about the same. There is a stark and striking element of hypocrisy here which one can almost be certain to be disdained by Divine Providence Her-/Himself. For logic is the one faculty that distinguishes Homo Sapiens from the rest of the denizens of the Animal Kingdom, and the expedient relegation of this faculty ineluctably deprives us of any authority to mount any self-serving moral arguments against the very human practice of homosexuality.

It equally does not make sense for Togolese nationals to be voting in Ghanaian elections, quadrennially, on dubious grounds of these foreigners’ having the right to dual nationalities and citizenships merely because they have one parent who was either born in Ghana or has acquired Ghanaian citizenship, knowing fully well that citizenship is far more than the mere nationality of one parent.

Needless to say, the legal exercising of one’s franchise entails one’s regular and perennial residence in the locality of one’s exercise of the franchise. Likewise, to be able to exercise the right to vote, one ought to have worked and paid taxes geared towards the development of the locality in which one intends to vote for a considerable length of time, as specified by the Constitution of the country in which one intends to vote.

These are some of the critical questions which our leaders, both religious and secular or laity, ought to be talking about. Leading a godly lifestyle extends far beyond the question of the expression of one’s sexuality. But I guess sexuality has assumed a central role in the discourse on Christian morality, because sex plays a vital and fundamental role in the generation of life.

It also does not make sense for Ghanaian politicians to nihilistically presume that South Korean architects and building contractors are, somehow, more talented and professionally better qualified than their Ghanaian counterparts to build houses for Ghanaians to live in. And yet, such patent self-hatred and abject lack of patriotism did not prevent the Ghanaian electorate from supposedly endorsing the presidency of Mr. John Dramani Mahama, with the criminal complicity of the Atuguba-presided judicial panel, made up of nine justices of the Supreme Court of Ghana. And, of course, in the case of the infamous STX Scandal, we have witnessed United Nations’ Secretary-General Mr. Ban-Ki Moon mischievously run public relations interference for President Mahama as to, for instance, have the Ghanaian leader chair image-making international confabs.

And, predictably, no Ghanaian statesman, religious or secular, has been heard to promptly and constructively warn Mr. Ban-Ki against such unsavory and lurid diplomatic meddling in the affairs of Ghana. Indeed, we may not like what the science of genetics, biology and human sexuality washes upon our shores, like Jonah in the belly of the whale, but that is part of the same Trinitarian Mystery that enables us to suspend the reality of human procreativity.