Is migrant crisis swinging back to Libya?

By Herve Bar with Fanny Carrier in Rome 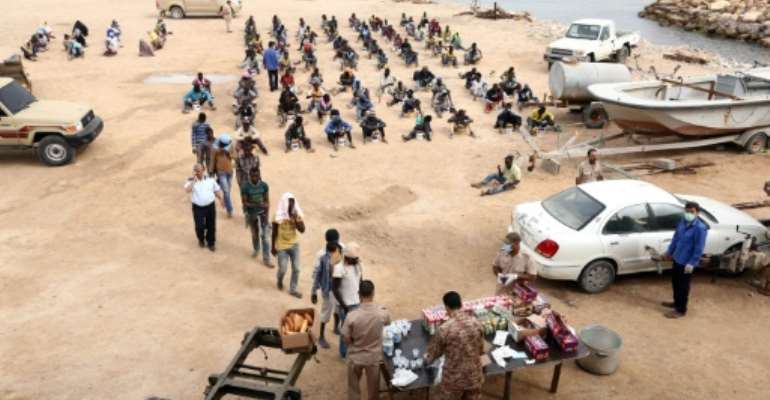 Migrants arrested earlier in the week receive food distribution in Tajura, a coastal suburb of the Libyan capital Tripoli on October 10, 2015. By Mahmud Turkia (AFP/File)

Paris (AFP) - European fears are mounting that Libya could once again become a hotspot in the migrant crisis, with several thousand people who fled from the troubled country rescued in the southern Mediterranean this week alone.

Analysts warn that the Islamic State group -- which has significantly expanded its control in Libya -- could send jihadists to mingle with those trying to reach Europe.

The coast of the north African state has for several years been one of the main launch points for migrants, many escaping the chaos that erupted after longtime dictator Moamer Kadhafi was ousted and killed in 2011.

Around 330,000 have landed in Italy via Libya since the start of 2014, many on the southernmost island of Lampedusa.

But last year the number taking that route was dwarfed by the hundreds of thousands who made their way to Europe through the Balkans via Turkey and Greece.

Now it seems Libya could again become a major springboard for those seeking a new life in Europe, just as the EU clinched a deal with Ankara to stem the flow from the Turkish coast.

Leaders from six EU nations led by Britain were holding talks in Brussels Friday on how to tackle migration from Libya.

"We can't afford to take our eye off the ball and just focus on the eastern Mediterranean route, we should be looking at other routes too," British Prime Minister David Cameron's spokeswoman said.

In a three-day period this week, more than 3,100 people who set off from the Libyan coast were rescued in the Mediterranean, and spring has only barely begun.

Around 950 people were picked up by a German naval vessel and the Italian coastguard on Tuesday.

The next day, almost 1,500 packed onto 12 rickety boats were rescued by the Italian coastguard. They included dozens of children.

On Thursday, another 700 were picked up and three bodies were also recovered.

French President Francois Hollande warned at an EU summit in Brussels on Thursday of a "very serious risk" that if the turmoil in Libya continued, a new wave of migrants could try to move "through Malta, Italy and, eventually, once again, through Germany and France".

"It's obvious that the spring is going to bring a lot of migrants" from Libya, said Alain Coldefy, a former admiral in the French navy.

It is however impossible to say whether the recent surge represents an early stage of a massive new wave of migrants or a spike that tends to occur when people smugglers seek to profit from a period of calm weather.

With fine weather over southern Europe this week, conditions at sea have been easier than they have been for months.

The UN High Commissioner for Refugees (UNHCR) says 11,912 people have arrived in Italy by sea since the start of the year.

In the first three months of 2015, 10,165 successfully made the crossing from Libya to southern Europe, so the increase is negligible so far.

As in the past, almost all are from sub-Saharan Africa, and not from Syria and Iraq -- people fleeing those countries typically take routes through the Balkans.

By contrast, more than 143,000 people have crossed the Aegean Sea between Turkey and the Greek islands in the last three months alone.

The spectre of a massive exodus from Libya looms large for the EU, which is already struggling to cope with the influx of those fleeing five years of war in Syria.

Egyptian President Abdel Fattah al-Sisi warned Thursday there was "a risk of a wave of refugees two or three times bigger than we have now".

Coldefy said: "Now that we are about to agree a deal with Turkey, and the route through Greece is possibly about to be choked off, the most natural route for the migrants, and the simplest, will be to go through Libya."

The US-based Combating Terrorism Center (CTC) warned of another danger with the Libyan route -- that jihadists from IS, which has consolidated a stronghold in the Libyan coastal city of Sirte, could try to mingle in with migrants to reach Europe.

"There... remains the very real possibility that the Islamic State in Libya could serve as a springboard for attacking Europe," it said.

In the past, IS has condemned those who try to leave Islamic countries to live among the "infidels", but now it may well be making money from the lucrative business of people trafficking.