Your vigilance & courage will tell the difference - JJ 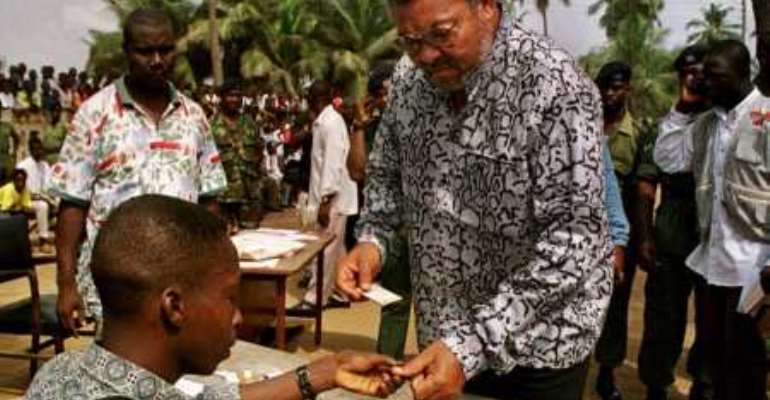 Accra, Dec. 7, GNA - Former President Jerry John Rawlings in the early hours of voting on Tuesday called on voters to be principled and vigilant because there were reports and intentions of electoral fraud in some parts of the country.

"But if Ghanaians will sit up and be principled, vigilant and courageous then they can prevent it and they will not be robbed of their victory," he said.

Former President Rawlings said this when he cast his vote at exactly 0915 hours at the Castle Public Works Department Polling Station cheered on by a group of people. This halted voting for about 10 minutes.

His arrival at the polling station, which is adjacent the Castle, the seat of Government, was greeted with shouts of praise and victory for him and the National Democratic Congress (NDC) in the elections.

Former President Rawlings said the kind of promotions that went on in the electronic media and reports of alleged missing ballot papers in the Volta Region spoke volumes of intentions to rig the elections. According to him the Western media had remained silent about some of the happenings in the country and asked: "Why are they not covering it? Is it because they don't want to provide evidence of the fact that President John Agyekum Kufuor is losing?"

The large crowd later followed the Former President singing praises and shouting "Victory for the NDC" as they moved away from the polling station and headed towards the Osu Oxford Street.

Before the arrival of former President Rawlings, voting at the centre, which started 10 minutes late, was progressing peacefully with party agents cooperating cordially with the election officials.