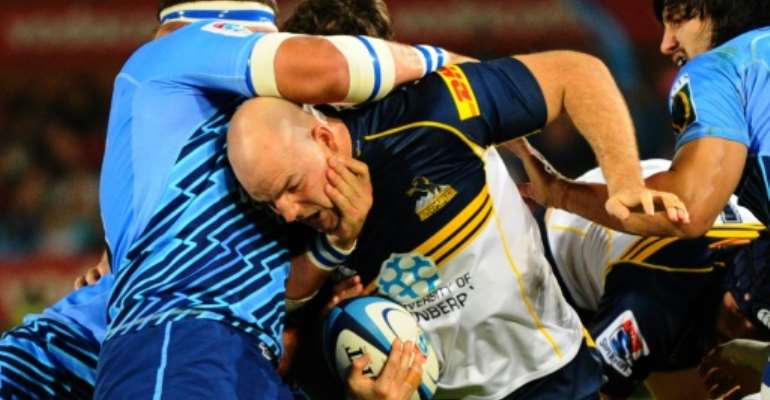 Sydney (AFP) - ACT Brumbies skipper Stephen Moore will be a marked man when he faces the Western Stormers in the marquee Super Rugby clash this weekend.

Stormers coach Robbie Fleck has made nullifying hooker Moore along with his breakdown specialist sidekicks David Pocock and Scott Fardy the number one priority for the South Africans as they look to get their season back on track.

The unbeaten Brumbies head to Newlands Stadium full of confidence after three rounds that have seen wins over 2015 beaten finalists Wellington Hurricanes and 2014 champions NSW Waratahs.

The Stormers last week suffered their first loss of the year to the Natal Sharks -- the only other unbeaten side in the expanded 18-team competition this year -- who take on the Northern Bulls at Loftus Versfeld.

New Zealand conference leaders Waikato Chiefs feature in Super rugby's debut appearance in Argentina where they play the Jaguares while the defending champion Otago Highlanders face the Waratahs in Sydney.

In Cape Town, Fleck has identified the breakdown as the area where the Stormers-Brumbies clash is likely to be decided and where the Wallabies-laden Australian outfit have been dominant this year.

The Brumbies are equal top of the try count with 15, the same as the Chiefs, and much of their success has originated from winning the battle of the breakdown.

"We understand that we are going to be under pressure in terms of our exits, at set-piece and at the breakdown," Fleck said.

"We have spoken about it for a number of weeks. It is the breakdown with Pocock and Fardy and Stephen Moore, they are going to put us under massive pressure there."

The Brumbies have kept the same line-up that downed the Western Force 31-14 last week which means the Stormers also have to find a way to shut down Joe Tomane.

Tomane scored three tries when the two sides met in the play-offs last year and has made the most line breaks in the competition this year with nine.

The Sharks have made five changes for the trip to Pretoria after beating the Stormers 18-13 last week with director of rugby Gary Gold saying it is part of a planned rotation and not a case of taking the Bulls lightly.

"This is a big SA derby and we are under no illusions about the physicality they are going to bring," he said.

"We want to improve each week and keep on building as a team. We are really keen to keep the momentum going now and, as a result, our confidence will keep growing. It's the reason we've rotated a few guys this week."

The Chiefs, 2012 and 2013 titleholders, will be in uncharted waters when they face the Jaguares at Jose Amalfitani Stadium in Buenos Aires as World Rugby steps up its drive to grow the game in South America.

The Jaguares are largely a shadow Pumas side, while the Chiefs feature several All Blacks although it is a non-international who has been their talking point so far this season.

The 20-year-old unflappable fullback Damian McKenzie heads the individual points scoring list with 57 and tops the tries list with three.

The Hurricanes, after getting on the board for the first time last week with a win over the Auckland Blues, start the fourth round on Friday against the Western Force.

Japan's Sunwolves play the Melbourne Rebels in Tokyo, the Canterbury Crusaders host the Kings, the Queensland Reds are at home to the Blues and the Golden Lions play the Central Cheetahs in Johannesburg.