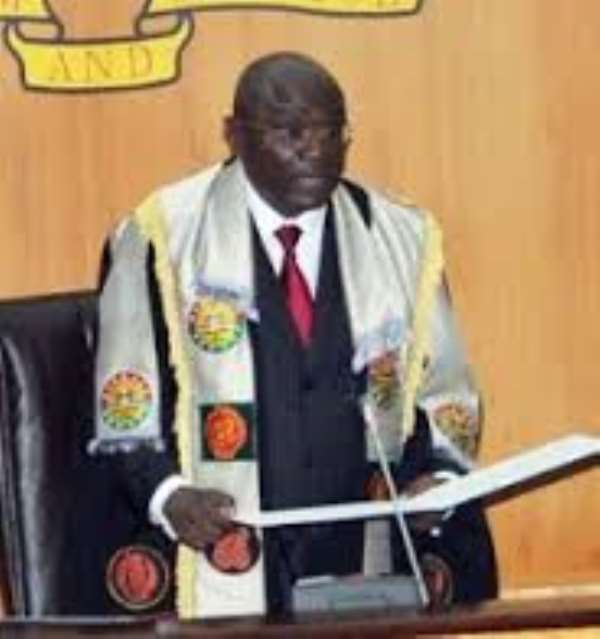 Accra, Mar. 16, GNA - Mr Edward Doe Adjaho, the Speaker of Parliament, was on Wednesday morning sworn-in as President of Ghana following the absence of both President John Mahama and Vice President Kwasi Amissah Arthur from Ghana.

The first gentleman and his vice are both visiting the Republics of Scotland and India respectively.

Chief Justice Georgina Theodora Wood swore the Speaker on the floor of Parliament.

The Speaker's swearing in is in accordance with Article 60(11) of the 1992 Constitution of Ghana.

'(12) The Speaker shall, before commencing to perform the functions of the President under clause (11) of this article, take and subscribe the oath set out in relation to the office of President.'

The Supreme Court in December 3, 2015 ruled that the Speaker of Parliament Edward Doe Adjaho violated the Constitution when he refused to take the oath of office as President in the absence of both the President and his Vice from Ghana.

The highest court of Ghana ruled on the matter brought before it by Mr Samuel Atta Mensah, the Chief Executive of Accra-based City FM, and US-based Ghanaian lawyer, Professor Stephen Kwaku Asare.

A nine-member Supreme Court panel chaired by Justice Sophia Akuffo ruled that the Speaker is obliged to take the oath of office as president whenever both the President and his Vice are out of the jurisdiction.

In line with the Constitutional provision, the Chief Justice Theodora Georgina Wood on two occasions in November last year went to Parliament to swear-in the Speaker in the absence of President John Mahama and his Vice Kwesi Amissah-Arthur.

But on both occasions, Doe Adjaho refused to be sworn in despite accepting to act as President. GNA