Lagos losing splendour of its Afro-Brazilian past 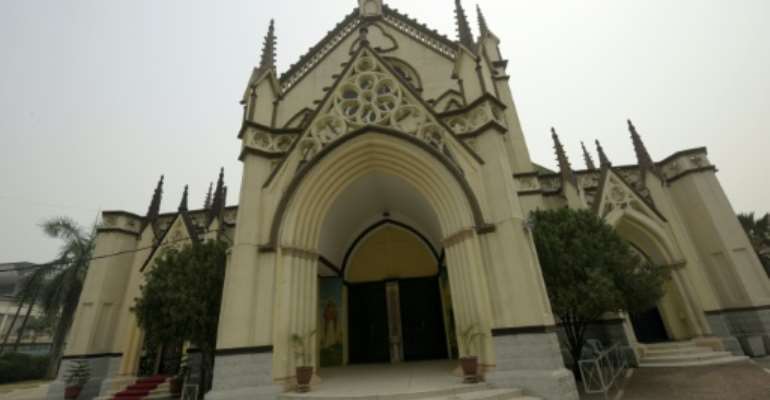 The Holy Cross Cathedral in Lagos was designed by African slave artisans from Brazil. By Pius Utomi Ekpei (AFP/File)

Lagos (AFP) - Octogenarian Yewande Oyediran sits back in a comfy armchair in her living room in the "Campos" quarter of Lagos, with its fading Brazilian heritage.

She talks about her great-grandfather Joao Esan da Rocha, from Osun state in southwest Nigeria, who was captured by slave traders in the 1850s, taken to South America and later freed.

"Frejon" -- a coconut bean soup popular in Nigeria and Brazil and eaten in the week before the Christian holiday of Easter -- is also a favourite topic.

"I don't wait until Good Friday to eat 'frejon'," she said. "I cook and eat it throughout the year."

But such Brazilian influences on daily life in Nigeria's financial capital are rapidly becoming hard to find.

Descendants are ageing, the pastel-shaded buildings of the "Campos" are being torn down, and few people, if any, speak the Portuguese brought back to West Africa by freed Yoruba slaves.

Only the colourful annual street carnival and a legacy of surnames such as Cardoso, d'Almeida, de Costa, da Silva and Gonsalves remind Lagosians of links to a South American past.

The declining influence is reflected in the dwindling number of Afro-Brazilian-style buildings in Lagos and nearby Badagry, from where thousands of slaves were shipped to Brazil, mainly to Salvador in the coastal state of Bahia.

Freed slaves, most of whom had converted to Roman Catholicism, began returning in the mid-1800s, bringing with them their new faith and architectural influences.

The "Water House" in the dilapidated "Campos" on Lagos Island was built in 1895 and along with the nearby Roman Catholic cathedral is one of the best examples still standing.

Other structures include the Shitta Mosque, which was built in 1892.

The buildings were a reflection of the new-found status of former slaves, many of whom went on to become government officials and successful businessmen after their return.

Oyediran's great-grandfather, for example, is thought to have been Nigeria's first millionaire.

But preserving heritage or, as elsewhere, making it a draw for tourists, has largely failed, as Lagos mushroomed into a megacity that is now home to an estimated 20 million people.

More domestic and foreign tourists could help Nigeria's economy, which has been battered by the global fall in oil prices since mid-2014, as well as by mismanagement and fraud.

One official in the Lagos State Ministry of Tourism, however, described efforts to maintain and preserve the city's Brazilian-influenced history as "lacklustre".

"These feeble attempts have been hampered by funding and corruption," he told AFP on condition of anonymity. "The children of the owners of these buildings are also not helping matters.

"Many of them do not value the historical monuments they live in."

Most of these Afro-Brazilian-style structures have either been redesigned or demolished to make way for characterless high-rise buildings, said Abiola Kosoko, a tour guide.

Yet the returning ex-slaves from Brazil "took over Lagos by storm with their special building designs," he said.

"The disappearance of Brazilian heritage has been drastic. Most of the buildings were pulled down for development's sake."

An Afro-Brazilian-style building collapsed on Lagos Island recently, added Kosoko, a royal prince as his great-grandfather was the king of Lagos, and who is writing a history of the city.

"Nobody cared to preserve it. They allowed the one-storey building, an architectural masterpiece, to disintegrate," he said.

"Even the annual 'Brazilian Carnival' and the 'Fanti' (Brazilian-style celebration of life and community shows) which used to attract foreign tourists are fast losing their allure these days," said Dayo Medeiros, whose ancestors were taken to Brazil.

"They are sometimes hijacked by area boys (local gangs)."

Most members of the Brazilian community "have melted into the generality of Lagos people and life", he said.

Many of the descendants of Brazilian returnees "sold their property along the Marina (shoreline) on Lagos Island," further making their culture fade into "insignificance", he added.

"It is a pity that we allowed the Nigerian factor to creep into it."