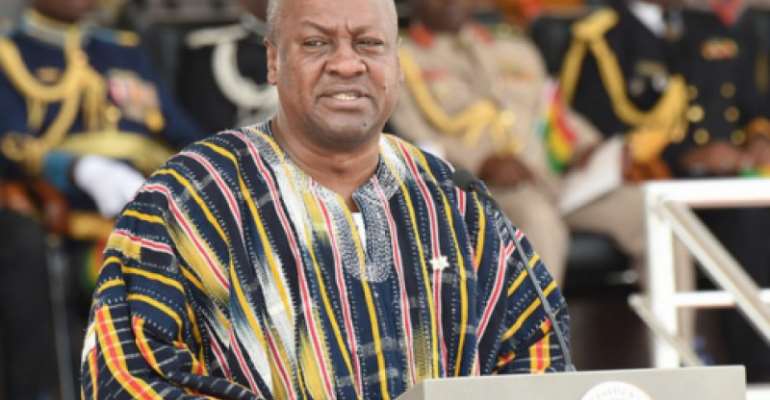 It is strange to observe that apart from the former acting Director of the Information Service Department, no one else from government has owned up for the disastrous brochure printed to mock the pride and dignity of the nation and its people on the 59th Independence Anniversary Celebration.

Now let me be one among some unpopular voices to say that we all make mistakes. And though these should be counted among one of those usual mistakes, however, they doesn’t fit in because the circumstances surrounding them are legendary and very too special to be taken for granted.

“Address by HE Uhuru Kenyatta, President of the Republic of Ghana”, as well as “Coat of Arm”, should not been considered ordinary mistakes. And what I found difficult to ignore is the description of Ghana given in the brochure. It is disgusting which amounts to a rape of the virgin integrity of the country.

“Ghana has a checkered but interesting history in the true sense of the word. As if by divine-designed, Ghana is strategically positioned on the equator making her the center of the of the globe. And like the sun, she radiates light to all parts of the world!”

Mistakes of these kind do not say much about the writers but rather questions their competence and that of their appointing authority.

The President has chosen not to comment on the disgrace he and his people in government have brought on us as a nation. This is so characteristic of him, especially, whenever he finds himself in a defenseless situation. Also, the Communications Minister, Dr. Edward Omane Boamah and his deputy, Felix Kwakye Ofosu have equally gone quiet because they understand there is nothing to defend about the brochure. The least said about the Head of Flagstaff Communication Bureau, Stan Dogbe, the better. Meanwhile, the Chairman of the 59th Independence Anniversary Planning Committee, Commodore Steve Obimpeh, has said Stan Dogbe was in-charge of the brochure. However, after the brochure fiasco went viral and assumed a national disgrace, Stan has refused to pick his calls.

What is the plan?
It has been the plan of President Mahama to conceal his shame and disgrace whenever he goofs. And in this situation, I reckon similar thing is hurriedly taking place. The government is busily covering up happenings surrounding the processes leading to the Independence Day brochure disaster. It is clear somebody is carrying the cross for someone, but the question remains: Who?

We were all surprised when Francis Kwarteng Arthur – the dismissed acting director of the Information Service Department (ISD) admitted his outfit made those mistakes and went ahead to apologize to President Mahama and the people of Ghana. As though not enough, the workers of ISD revolted and stood against the director the next day and demanded he came public to absolve the Department of any wrongdoing in the brochuregate. They told Ghanaians that for some time now their core duties have been stolen from them, yet they are paid at the end of every month from the taxpayers’ money.

The blunder committed by the director was not without consequences as he was dismissed by those he sought to protect. I am sure if President Mahama had received good counsel, he would not have sacked him unless he’s concealing something from the public. I believe the Civil Service rules of engagement do not permit governments to sack civil servants at their whim and caprices. These people enjoy some immunities and job security is one of such things. Then the question is that: Why did President Mahama sack him? Does this amount to the President committing a mistake in a plethora of mistakes?

Or could it be that the President knew he wrongfully appointed Francis Kwarteng Arthur even when he did not meet the qualification for the position? According to the rules of Civil Service, an entry point for the director of the Information Service Department (ISD) should be a minimum qualification of a Masters’ degree in communications, journalism or any related field and must be a member of a relevant professional association and also a minimum of 15 years relevant experience, with eight years in a senior management position. To our dismay, Mr Arthur does not meet anyone of the qualifications to be there. Perhaps this explains why the President was in a hurry to fire him before his appointment generates another disgrace for the government.

For the latter reason, I support President Mahama for sacking him and saving the government further disgrace. But I still believe his dismissal was illogical which only illogical minds of government officials will comprehend. The truth is that one needs not be a soothsayer and/or a prophet to establish that the government is using the director as a scapegoat to protect someone.

Could it be the replay of Elvis Afriyie Ankrah?

My guess is that it would not be long before President Mahama rewards Francis Kwarteng Arthur for his “national bravery” and defense of government incompetence. As happened to Elvis Afriyie, even though the Dzamefe Commission of Inquiry has established that some wrongdoings went on in the Ministry of Youth and Sports during the 2014 Fifa World Cup in Brazil, President Mahama did not respect accountability, but went ahead to do what he’s fond of doing - he re-assigned Mr Ankrah as a Minister of State at the Office of the President. He sacrificed the pride of the nation and did the ignoble thing, even when the minister has shown heighten disregard for national obligation.

Also, the NPP-led government of former President John Agyekum Kufuor did same in 2008 when he re-appointed Dr. Richard Anane after it had been established that the former Health Minister had illicit unprotected sex with a woman while attending an HIV-AIDS conference. Mr Kufuor ignored the recklessness and the gross incompetence displayed by Mr Anane and went ahead to renominate him. This irritated a leading member of the party, Nana Frema Busia to comment: “If questionable ethics affect democratic credentials, then the President is ill-advised, and must rethink the unwarranted insistence on a continuing Anane public embarrassment saga, and withdraw the controversial renomination in good faith.”

Tendencies of this kind has become a menace in the country committed by both the governing National Democratic Congress (NDC), and the opposition New Patriotic Party (NPP). Decisions such as this is taken by people who have a clandestine agenda to dupe and rape the country of its rich resources. Else why find it difficult to get competent people from the over 25 million citizens? My prophesy is that Francis Kwarteng Arthur will be re-appointed to head other institution in the coming days as a demonstration of government’s appreciation for his “kind gesture”.

Will an investigation into the Indece brochure be necessary?

It is important to establish who did what and why what happened happened. And the call by some civil societies including OccupyGhana, the Ghana Integrity Initiative (GII) and some political parties such as the New Patriotic Party (NPP) for the government to institute investigations into the matter is a good one, however, the investigation will be treated with a pinch of salt after it has cost millions of taxpayers’ money. It will be characterized by sloppy work and weak thinking impacting negatively the quality of the exercise.

I am not discrediting any form of investigation, yet it is important to consider how the government has treated in the past such reports emanating from investigations which cost taxpayers’ millions of cedis. Premised on this, I believe there’s no need for an investigation into the brochuregate. It may sound radical, but that is the truth; the investigation, if conducted, will blame nobody. So why investigate into a matter when nobody would be held culpable for disgracing the President and the entire nation?

The way forward is to chew, pour, pass and move on:

I still stand with the unpopular voices that we should forget this episode of our history and move on as a nation. We cannot continue to saddle ourselves with this disaster that has befallen us as though there is nothing at stake. And yes for how long are we going to lament copiously about the terrible blow the image of our dear nation has been dealt by President Mahama and his people? We have to move on and continue to monitor the government before it suffocates us with a plethora of debts in a year or two to come because of President Mahama’s unrestrained desire for borrowing. Having said this, I think President Mahama has to apologize for disgracing the country. We may allow this national disaster to pass, but he has to pay for it. Ghanaians must not treat this as ordinary, because this government has a legendary history of disrespecting processes and procedures of good governance.

Need I say more? We all have to pay one way or the other for our misdeeds. It is nothing personal. What we should not support as a people of this small but great nation is a government that has no respect for the needs of future generations. If any government places emphasis on too much borrowing it is a demonstration of its disregard for the future health of the nation. But if a government exhibits the tendency for disgracing itself and the nation, it only means, it will do more into the future because unlike a Junior High School student, it has no time for learning nor a brain for soft comprehension.

Kwabena Brako-Powers is an Online Journalist with Myjoyonline.com