Struggle for life on a neonatal ward 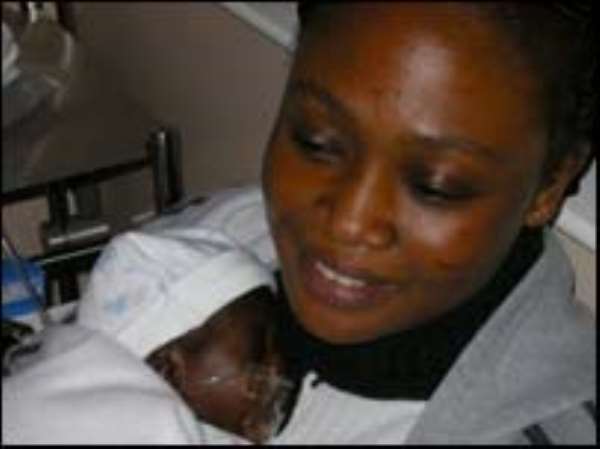 When Raphael Opoku was born 14 weeks early, his mother was unprepared physically or mentally for his arrival.

Patricia had complications and Raphael had to be delivered by an emergency Caesarean.

Since his birth 11 weeks ago, Raphael has been in an incubator in the neonatal intensive care unit at the Homerton University Hospital, in east London.

He is surrounded by other tiny and often very sick babies. Machines are constantly beeping around him, helping the babies with their breathing, monitoring them and feeding them.

The sound of the machines is made even more noticeable by the absence of the usual noise of babies crying.

Parents sit quietly by their babies' cribs, watching them and where possible feeding and burping them themselves.

The nurses are busy, but quietly efficient.

Although the unit is obviously hi-tech, the parents have made the incubators as personal as possible.

Some have large teddies inside their Perspex incubators, and all have name cards identifying the tiny occupant.

Raphael has a teddy and a Bible with him in his crib.

Each day Patricia spends hours just sitting by his bedside watching Raphael and trying to bond with him.

But she says the last few months have been a huge struggle.

She came to the UK from Ghana just four years ago and says she has no family to support her in the UK.

Because her son is so ill she has not been able to carry out her work as a hairdresser.

However, she is hopeful that Raphael might come home soon.

"I have felt really bad because I was not expecting him to be born so soon and I was not confident dealing with a premature baby.

"I come in everyday to see him and give him his special feed, but I feel terrible, although I do feel more confident about how he is doing.

"The staff here have helped me a lot."

Raphael is just one of the 120-130 babies ventilated in the intensive care unit at the hospital each year.

Kate Costeloe, professor of paediatrics at the Homerton, said the hospital saw a higher than average number of babies born prematurely and said this was particularly prevalent among West African women, like Patricia, and West Indian mothers.

"It does seem to be more common amongst West African and West Indian women for reasons which we do not understand."

"We have found areas with a similar population mix, such as Lambeth, Southwark and Lewisham, have similar high admissions."

And Professor Costeloe added: "It is the case that some women have a small and premature baby again and again."

She said that babies were not usually admitted before 23 weeks and that most of their babies were between 24 and 26 weeks gestation.

But each year, the unit cares for around five or 10 babies born at 23 weeks.

She said that, with the advent of drugs to mature the lungs, units like hers were now able to do so much more to help babies like Raphael.

But she said that although many more do survive, each year a number do die or are severely disabled.

For one new mother the future is already looking brighter.

Salma Mulla, of Stoke Newington, in north London, is waiting to take her little boy home.

"It just happened all of a sudden. For a day I had a really bad headache and then I had blurred vision. I didn't know what it was.

"Then I had a fit and passed out and my family called me an ambulance. I had a Caesarean and I can't remember much about it.

"I was completely overwhelmed by the whole thing. I did not know what was going on and I was not prepared for the birth at all.

"When he was first born I didn't see him for the first two days - there were so many machines and test-tubes attached to him that it was really scary.

"He is my first baby and I needed a lot of reassuring. But he has been doing really well. He had a heart murmur, but that has settled.

"I am managing to breastfeed him by expressing and I come in each day and spend two or three hours with him.

"But I had nothing ready when I gave birth. We had looked at cots, but we had not bought anything and we had no clothes for him.

"I am nervous about taking him home because I have been getting lots of help here, but I am feeling more confident."