Report of media coverage on political parties out 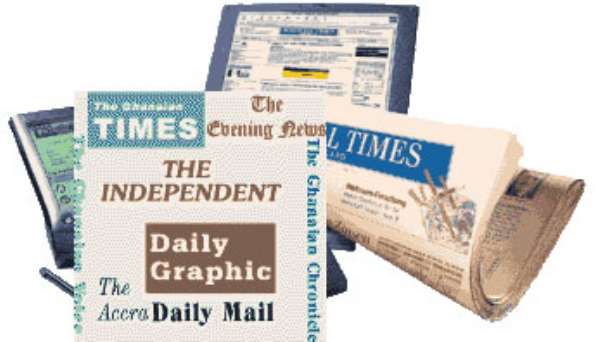 Accra, Nov. 30, GNA - Ghana Television (GTV) gave the largest airtime to the New Patriotic Party (NPP) on any coverage between September 16 to November 19, this year.

This was contained in report Mr Kweku Rockson, a Media Consultant presented to the National Media Commission on the monitoring of Media Coverage of 2004 Presidential and Parliamentary Elections on airtime and space accorded political parties.

The rationale behind the report was to give the constitutional guarantees on press freedom and the operations, especially of the state-owned media.

It was also to determine how all the presidential candidates were given equal access to the state-owned media.

Mr Kofi Atansah, Chairman of the National Media Commission (NMC) chaired function, which saw the presentation of the report that also looked at how the state media offered fair opportunity and facilities for the expression of divergent views and dissenting opinions. According to the report GTV provided more time to the political parties than any other TV station in the country.

The NPP had more favourable and unfavourable news stories than the other parties.

On the other hand TV3 gave the highest number of favourable stories to the National Democratic Congress (NDC) and presented more unfavourable news stories on the NPP.

In terms of frequency of coverage of political parties, the NPP came first followed by the NDC and the CPP and PNC had equal scores. Metro TV gave more coverage to the NPP than any other party while TV3 had most of the their stories on the NDC.

TV3 covered more political stories than any other TV station The report said the NPP was given the highest amount of airtime followed by the NDC, CPP and the PNC in that order.

The NPP women had the highest number of coverage with the greatest number of favourable and neutral stories, while most of the GTV stories favoured the NPP women politicians and allotted more time to them than the rest of the parties.

TV Africa gave more time to women politicians of the NDC than the other parties.

With the newspapers in terms of coverage the NPP had the highest number of stories than any of the political parties in all the newspapers.

According to the report The Chronicle gave the NPP more news stories and space than any other political party, while Palava, Chronicle and Evening News published more stories and allotted more space to the NPP women politicians.

The Lens and the Ghanaians Post gave more news and space to the NDC women politicians.