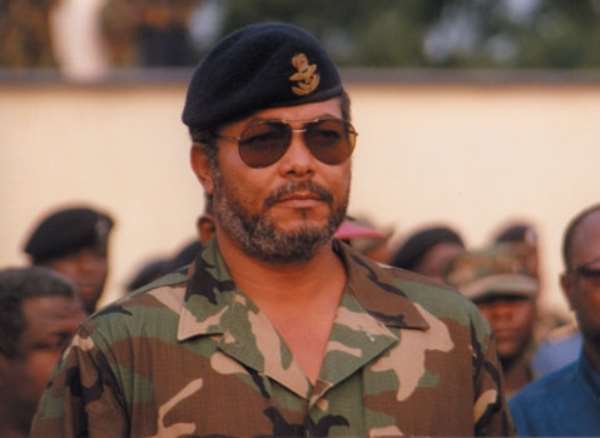 Don't concede defeat, he orders cadres behind Mills FORMER PRESIDENT JERRY John Rawlings is bent on convincing the large number of NDC cadres not to accept the results of the Electoral Commission (EC) if it ever declares ex-Vice President John Evans Atta Mills a loser at the December 7 poll, deep throat sources within the main opposition party have told this paper.

In a worrying development, he has already begun communicating this order to cadres of the NDC at various meetings across the country that could see the cadres fomenting trouble should the results not go the way of the NDC.

Insiders say Mr. Rawlings has been meeting cadres during most of his campaign trips and sizing them up for a rejection of the poll results.

Sources say they doubt if the party's flagbearer is fully briefed on this order.

Efforts to reach Special Aide to the former President, Mr. Victor Smith, on this issue yesterday proved unsuccessful as the phone line could not hold. He could not also get back to this reporter as he pledged.

But Mr Rawlings' directive follows fears that a loss by the NDC at this year's election could split the main opposition party.

Interestingly, whilst the party says it is hopeful that it would win both the presidential and parliamentary elections, key functional executive members say things are not all that it seems. The party is virtually broke, with the expected funds from Chairman Rawlings nowhere to be seen, forcing some party officials to source funds from key figures within the ruling NPP.

Gye Nyame Concord can also reveal that some members of the NDC, particularly some MPs, have been in talks with elements within the opposition Nkrumahist Convention People's Party (CPP) to form an alliance of sort, or faction, of either the NDC or CPP different from a Rawlings-led NDC. Some have already began negotiation on what form such a party should take, this paper can reveal

The fear of this group is that the NDC might lose the elections because of the difficulty in garnering revenue for the December 7 poll, leading to a split later on.

The party is yet to fully regain its composure after the recent announcement of a running mate, with some of the potential running mates – with the exception of the youthful and dynamic Bole MP, Hon. John Dramani Mahama - absent from the campaign frontline.

The Obed, Fante/Rawlings factions of the party have also not been able to fully rise above their differences, worried members of the party told this paper yesterday.

Sources say an attempt to find a stand-in for the fiery presidential running mate and MP for Kumbungu, Alhaji Muhammed Mumuni, among his colleague-competitors after his accident to keep the party's chances afloat flopped, compelling the NDC to fast track Mumuni's recovery process in order to use him to reach out to Moslems across the country. Though he unfortunately fell down twice within a week of his first outing - first during a visit to the Chief Imam's residence at New Fadama, Accra, and again at the mammoth NDC rally at Mantse Agbona, James Town – he has recovered and has joined the campaign trail, albeit with difficulty.

More importantly, the party is fighting a debilitating cash flow problem apart from the nonchalant participation by some key members.

Sources say funds promised by the Founder have not been forthcoming, with the ruling party and some key Ghanaians also thwarting attempts by the NDC to source external funding from South Africa, the United States and a number of African countries.

In a classic case a day after the immediate announcement of his name as a running mate to Prof Mills, sources say Alhaji Mumuni went to party Chairman Dr. Obed Asamoah seeking financial capital and a 4X4 four wheel drive to travel to his constituency.

He received a massive no funds response, with an advice to head towards the “Boom Junction”, Ridge residence of the former President and his wife, the influential Nana Konadu Agyemang Rawlings. Go to Mr. and Mrs. Rawlings was what he was told, sources close to Mumuni told this paper.

Meanwhile fears are that if the party should stay in opposition for another four-year term, it might not be the same. Quite a number of NDC officials have complained bitterly about the effect of opposition, with some suggesting that in as much as the former President displayed a strong anti-opposition attitude towards the ruling party, they ensured that their colleagues in the then NPP at least received contracts to keep them going.

In their view, the situation is presently worse, with them being starved of contracts; an allegation that the NPP has consistently denied.

Meantime, the ruling NPP believes it would win the elections and that it would win 160 out of the 230-seater Parliament.

But the NDC, which appears to gathering steam within the past few weeks, also believe that Ghanaians are tired of what it sees as a worsening economic situation of the average Ghanaian.

Analysts, however, suggest that whilst the NPP's history may not be all that impressive considering the promises and hope of most Ghanaians during the last elections, it would win the next elections because of the overall improvement in the human rights situation and its performance at the macro-economic level.

It has also had a very successful campaign of superimposing the man it sees as the official candidate of the NDC, two times elected President and the man who scares a number of people concerned about the NDC not too pleasant past - Jeremiah John Rawlings, on the face of its opponent.

The colourful Rawlings, who shot into prominence in a failed coup attempt 23 years ago with images of anger, hunger and frustration, simultaneously represents hope and fear; light and darkness to many Ghanaians.