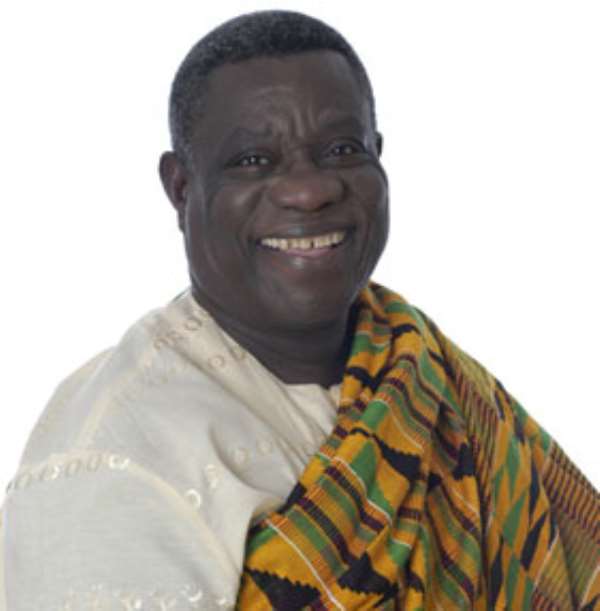 Sekondi/Takoradi, Nov 29, Chronicle -- Professor John Evans Atta Mills on Saturday, left a huge crater on the confidence level of the New Patriotic Party when he pulled unaided, a huge multitude to what was billed to be a metropolitan rally here without the legendary pulling power of his political godfather, Jerry Rawlings. He had just blitzed Elmina hours earlier. But the late show in this intensely NPP stronghold where the likes of Messrs Paapa Owusu Ankoma (Attorney General), Gladys Asmah (Minister for Women's Affairs) and lately author, lawyer and Presidential adviser, Mr. Joe Ghartey have mounted political barriers against the NDC war machine made pundits and voters scratch their heads as to whether Mills was really coming home with his adze wo fie o ye in the face of such seeming insurmountable odds.

The sheer size of the crowd shocked many people in the twin-city, including journalists. It was so thick that the police had to quickly block one of the roads in front of the Ghana Telecom offices to traffic to avert accidents after failing to control the crowd from surging onto the road.

The rally was organized to draw down the curtain on Prof. Mills' last campaign tour of the western region which party executives say must be won if the NDC is to get back to the Osu Castle.

The party national chairman, the politically clever and seasoned political tactician, Dr. Obed Asamoah confirmed that the western region was dear to their hearts after conceding that they had lost in the Ashanti and Eastern regions but insisted that they would win in the remaining regions. 'We will however try to win the popular votes in these two regions,' he assured.

Supporters of the party who were clad in party colors, singing and dancing to the tune of party songs, started trooping to the PWD park, the venue of the rally as early as 11 am when the Professor himself and his entourage were touring Shama and its surrounding villages to canvass for votes.

Shama itself, a curious constituency with a mind of its own, defies straitjacket characterisation; it is almost certain to go to the NDC in the presidential election, but may go to the NPP this time round if the last minute coalition between the NDC and the Reform collapses.

In Takoradi, supporters were beating gong gong amid singing and dancing through some of the principal streets in the city to announce the presence of their leader in the city. Earlier, the regional chairman of the party, Nana Alex Asamoah had also gone on air to call on the people to turn up in their large numbers to welcome the flagbearer.

Around 2pm, the crowd had become so thick that the police whose presence were felt at the rally ground had no option than to close one of the dual carriage lanes to traffic. Some of the supporters who could not get space at the main park were compelled to climb articulated trucks to catch a glimpse of their leader.

Others too were standing behind the road with some also standing on top of their storey buildings.

At exactly 3:40pm, Mills' personal security men who were escorting him started blowing siren to announce the arrival of their presidential candidate to the rally ground. The crowd then went “crazy” by pouring on the road to welcome their leader. The securitymen that included the police and Mills' personal ones had it tough preventing the crowd from using themselves as human shields to prevent the professor's vehicle from moving.

After a hectic time, however, Prof. Mills who was accompanied by his national chairman, Dr. Obed Asamoah, Mr. Kofi Totobi Quakyi, a minister in the NDC regime, Mr. Ato Ahwoi, board chairman of Accra Hearts of Oak and a host of other party executives were ushered onto their seats.

An elated Prof. Mills who was apparently inspired by the size of the crowd he was seeing in the city considered as the strong hold of the ruling party had this to say when he got the opportunity to address the crowd: “ NDC is moving back to the Castle. These people (NPP) are too arrogant but I, Atta Mills will rule with humility.” The response was deafening and significant.

Beaming with smiles, Prof. Mills said NPP spent our money to chase CNTCI loan which turned up to be a hoax but instead of accepting their mistakes and apologizing to Ghanaians, they were rather showing signs of arrogance, noting that Ghanaians would show them where power lay, come December 7th.

Mills who was surrounded by both his national and regional chairmen also challenged the so-called clean human rights record of the NPP government. “You sacked people from their jobs just because they were sympathizers of the NDC. Journalists are also being questioned here and there because of what they have reported and you still tell me you have clean human rights record,” he asked rhetorically.

He noted also that businesses were collapsing in the country because of the extreme vindictiveness being shown to investors and businessmen who the government suspected to have sympathy towards the NDC. “Atta Mills government will never do any of these,” he added.

Mr. Totobi Quakyi on his part said in Prof. Mills, the NDC had a good leader.

He noted that despite all the noises the NPP was making, they had not been able to pin point any wrong doing against Mills and called on Ghanaians to vote for Mills who would rule with the truth and without lies. He noted that Ghana was now more divided than before because some people had decided to rule with divisiveness and dishonesty.

We therefore need a leader who would unite us all, he said.

We were not influenced by any party to reject your rice, we ...
56 minutes ago