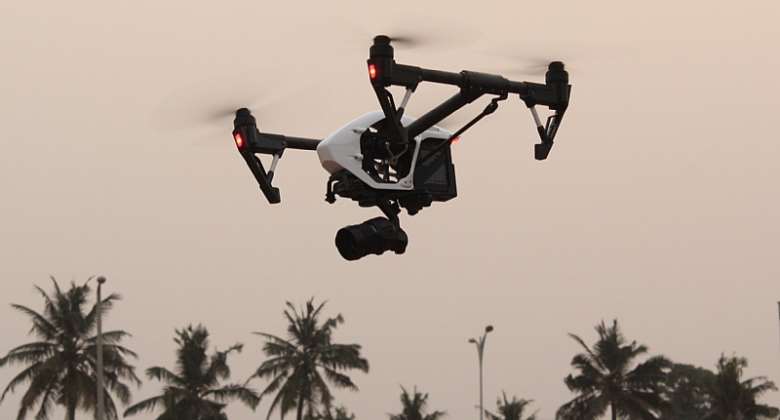 An unmanned aerial vehicle popularly called a “drone” is in deployment in Ghana for what some say is for civilian purposes.

A drone is a small aircraft piloted by computers on board or by remote controls on the ground. They are often used for military purposes because they don't put a pilot's life at risk in combat zones. However, with the advancement of technology, drones can now be produced for commercial use.

Whilst others hail the presence of a drone in Ghana as a technological breakthrough, several others have condemned the use of the aerial vehicle as a violation of the aviation laws of Ghana.

According to them, because of the wide ranging activities that can be undertaken by the help of the drone, laws must be put in place to guide their use.

In the United States of America, for instance, Federal Aviation Authority guidelines demand that drones and other model aircraft must stay less than 400 feet above the ground and not within 3 miles of an airport.

Steering a drone over someone's house and property could be considered a trespassing violation.

A drone was recently found in the skies of the Trade Fair Centre at La, taking pictures and videos of the official handover of some sanitation equipment from the Zoomlion Company Limited to the government of Ghana.

In Europe and in some parts of North America, drones are deployed for live telecast of football matches, for shooting videos and for other domestic and civilian purposes.

However, the drone has also been used to commit some atrocious crimes and brutalities never seen before in human history.

In the Zionist state of Israel, the secret service, Mossad, employs the drone as a weapon in the slaughter of Palestinian women and children.

In Saudi Arabia, the drone is used to spy on critics of government and to muscle down popular protest against the dictatorship.

In Afghanistan, Pakistan and in Iraq, civilian populations in their thousands has been killed by the drone in the US led war against terrorism. This war has only brought more misery to the Middle East and made it in many places unfit for human habitation.

On an even more serious note, campaigners against narcotic drugs are worried and disgusted at the insurmountable evidence that suggests an increase in the number of opium farms across Afghanistan in spite of the use of the drone in the monitoring of these activities. Currently, Afghanistan leads in the cultivation, processing and in the trade of opium across the world.

In the United States of America, the Bush and Obama administrations are facing legal tussles in court over the deployment of drones for unapproved surveillance of civilians in unjustifiable violation of the privacy of many citizens.

Whilst the drone can be considered to have become a part of technological advancement in human life, it must be deemed appropriate that a legal framework that govern the use of such aerial vehicles are put in place to check against abuse.

Drones in Ghana, how interesting?

Hottest Photo Reports
Catch up with all the political quotes from our politicians.
Advertise here
More from Opinion
ModernGhana Links
Antimicrobial Resistance: Where Did We Go Wrong In Our Efforts To Help Humanity?
Will Free SHS and other Policy of Government be Cancelled Now That We Are Going to The IMF?
Are the current happenings in Ghana a suggestion that the NDC has won the 2024 elections in advance and NPP should forget about it?
TOP STORIES