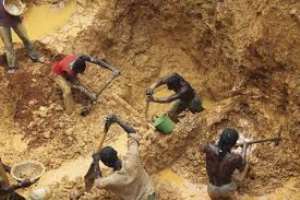 The concerned youth of Wamanafo in the Dormaa East District of the Brong Ahafo Region, have issued a final warning to illegal miners (Galamsey operators) in the area to leave or face the wrath of the citizens.

According to Mr. Emmanuel Amponsah, Spokesman for the group, who was speaking to Nana Kas on Sunyani-based Suncity radio, the Galamsey operators have created over 370 open pits, which pose death traps to citizens of the area.

He explained that aside of the lives that are lost, a lot of farm lands were being destroyed, thus depriving the people of their livelihood.

Mr. Amponsah disclosed that in spite of several appeals and petitions to the District Chief Executive (DCE), the District Police Commander and other authorities in the area, no action has been taken to remedy the situation and the illegal miners continue to expand their operations, to make life quite unbearable for several people in the area.

The Chief of Ampekro, Nana Yeboah, on whose land the miners were operating has denied giving them concession to operate in the area, and added his voice to the youth for the illegal operators to leave the area immediately.

He however accused the Twafohene of Mansen Traditional area of being behind the miners and said he and his people were going to lodge a formal complaint to the Omanhene of Dormaa Traditional Area, Osaagyefo Oseadieyo Agyeman Badu II to call the Twafohene to order and halt the devastating effects of illegal mining by driving the operators away from the area for peace and progress to prevail.