Economy on road to recovery - Terkper 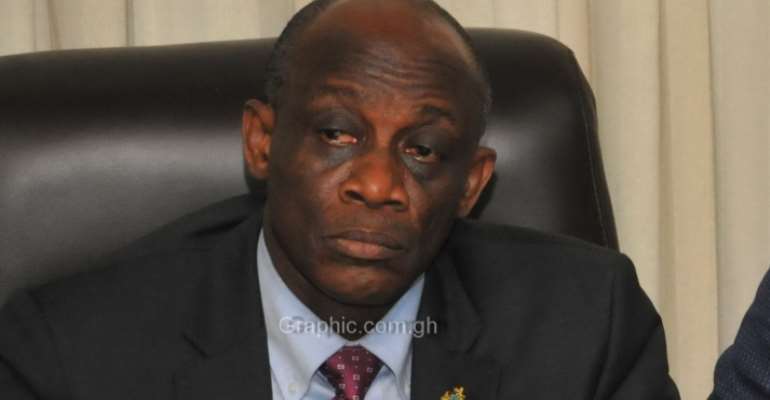 The Minister of Finance, Mr Seth Terkper, says the economy is on the track to recovery and with the assistance of the International Monetary Fund (IMF), it is expected that the country would avoid the slippery path of previous election years.

Speaking at a media briefing in Accra Tuesday, he said in the government's home-grown policy and IMF programme there were glimpses of good gains as the economy consolidated.

'The withdrawal of subsidies is helping to consolidate gains. Budget deficit is down to 2.5 per cent GDP; a reduction that is remarkable,' he said.

According to him, the government is forecasting a GDP growth of 4.1 per cent in 2016, compared to the 3.5 per cent initially projected; while the World Bank was projecting growth at seven per cent.

Mr Terkper reiterated that the tough and sometimes unpopular economic decisions taken by the government were to correct the recurring election-year challenges.

The finance minister repeated the government's commitment to resist the election -year overspending which had been a major economic risk in the country's previous elections.

He said 2016 was a significant year because it was an election year, but in spite of that fact, 'we will resist the temptation of election-year overspending.'

Economic risks
'There are risks and challenges to the economy, but as the President has said, we will contain the fiscal pressures that come in election years,' Mr Terkper said.

He reiterated the government's will to avoid any move that might result in spending beyond what had been budgeted for in 2016 to halt the habit of incurring huge debts after election years.

The minister said he was confident that economic growth was expected to improve in the medium term as the country remained on track to double its hydrocarbons production in the next two years.

The country's economic growth rate topped nine per cent in 2011, but three difficult years followed that were characterised by slowing activity, accelerating inflation, and raising debt levels and financial vulnerabilities.

The country's economic prospects were put at risk by the emergence of large fiscal and external imbalances, as well as by electricity shortages.

Ghana suffered a difficult economic setback after the 2012 elections when the country recorded a fiscal deficit of 11.5 per cent but was brought down to 10.1 per cent after some difficult economic choices. In 2015, the deficit has also been reduced to 7.0 per cent of GDP and there are projections that deficit will be reduced to 5.3 per cent sparking hopes of economic recovery.

Fiscal deficit
The deficit was again successfully brought under control to 10.2 per cent in 2014 forcing the country to opt for an IMF financing package that extends over three years under an Extended Credit Facility.

The reform measures are expected to dampen non-oil growth initially in 2015 ahead of a projected growth rebound in subsequent years.

The government's programme projects an economic growth pickup to start in 2016, driven by expected large increases in country's hydrocarbon production, which started commercial oil production in 2010.

Debt management strategy
As part of measures aimed at reducing the debt stock, Mr Terkper reiterated moves by the economic team to press on all commercial and quasi-commercial projects to refinance themselves.

He added that the government had decided as a matter of priority to secure long-term loans that would have the capacity to pay for themselves in order to insulate the taxpayer from paying for such facilities.