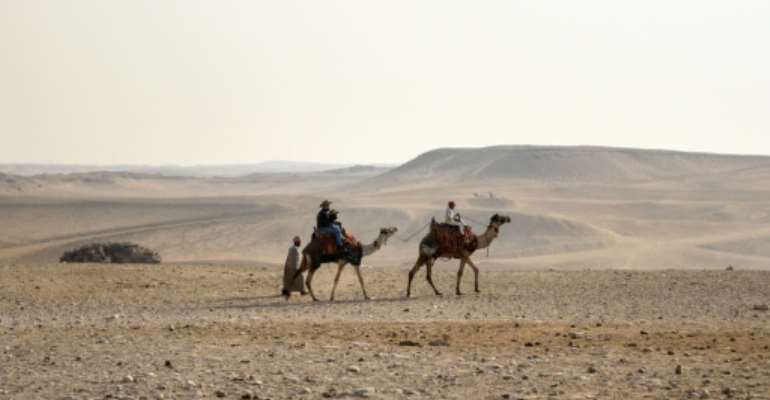 Since the ousting of Islamist leader Mohamed Morsi as president of Egypt in 2013, a deadly insurgency led by the Islamic State jihadist group has kept away millions of tourists. By Mohamed El-Shahed (AFP)

Cairo (AFP) - Said Ramadan has lost count of how much he's borrowed just to stay afloat while other vendors at Giza's pyramids have already lost hope, as jihadist attacks bring Egypt's tourist industry to its knees.

"I have no money to buy clothes for my children ... I hardly make any money as so few tourists are coming," Ramadan, 42, said at his dilapidated one-storey brick house near the world heritage site.

Since Egypt's then army chief and now President Abdel Fattah al-Sisi ousted Islamist leader Mohamed Morsi in 2013, a deadly insurgency led by the Islamic State jihadist group has kept away millions of tourists.

Tourism in Egypt was dealt a body blow when a Russian airliner blew up mid-air over the Sinai Peninsula on October 31, killing all 224 people on board, mostly Russian tourists.

The Islamic State (IS) jihadist group claimed it downed the jet with a bomb on board.

Tourist arrivals, already dwindling since the turmoil triggered by the 2011 ouster of longtime dictator Hosni Mubarak, plummeted after the plane crash.

The thousands of foreigners who used to jostle shoulder-to-shoulder while passing through the metal detectors of the famed pyramids and Great Sphinx complex each day have simply vanished.

Now, visitors to the more than 4,600-year-old monuments are mostly Egyptian college students or families from outside Cairo.

On a rocky path leading to the pyramids, vendors display miniature statues depicting Egypt's pharaonic era, but sales are rare.

Dozens of camel handlers stand dejected for hours on end as visitors, snapping pictures standing next to them, turn down rides across the scenic desert plateau.

"There was a time when I made a thousand (Egyptian) pounds ($125) a day. Now I'm lucky if I earn a hundred," said Ibrahim as an Egyptian couple photographed his camel.

Dozens of men, speaking fluent English, Italian or Russian, canter up and down the plateau on horseback, offering cheap rides but with barely any takers.

Buses, which previously ferried about 50 tourists at a time, now drive in with just five or six visitors.

Many tourist hotels near the pyramids, which boasted 100-percent occupancy before the 2011 uprising, are all but empty.

Gun-toting policemen now stand guard behind iron barricades at the entrances to the pyramids, forcing private tourist vehicles to park far from the complex to prevent attacks.

Dozens of plainclothes policemen mingle with visitors in the complex, making random checks.

Seven people, including five policemen, were killed in January in a bomb blast when a team of officers raided an apartment in a neighbourhood near the pyramids.

An Egyptian affiliate of IS claimed responsibility for the blast in the capital's Al-Haram district which houses several tourist hotels.

"When tourists see people killing each other, how do you expect them to visit our region?" asked Merdash Ghanem, owner of a wholesale souvenir shop near the pyramids.

"Before Daesh became known, I had groups of tourists visiting my shop every day, but now I hardly receive three or four," he said, referring to IS with its Arabic acronym.

The Russian plane crash dealt the heaviest blow, he said.

The Saint Petersburg-bound plane crashed minutes after taking off from the Red Sea resort of Sharm el-Sheikh.

Moscow barred all Russian carriers from flying to and from Egypt afterwards, and Britain suspended air links with Sharm el-Sheikh.

"What we need is Russian, British and American tourists, and they're not coming," said Ramadan as he rushed to try to interest a group of Chinese tourists in miniature statues of King Tutankhamun and Queen Nefertiti.

Revenues from tourism slumped 15 percent year-on-year to $6.1 billion in 2015, with the last quarter hit by the Russian and British flight bans, the tourism ministry said.

"Regional turmoil in Iraq, Syria and Libya is also impacting tourism here, and if Russians and Britons don't return, tourism in Egypt will be wiped out," said Ibrahim El-Ghitany, a researcher at the Cairo-based Regional Center for Strategic Studies.

In the shadow of the pyramids, Ibrahim the camel handler looked dejected even as he tried to put on a brave face.

"For generations we've worked with tourists. This is all what we know. We just have to wait for things to improve," he said.