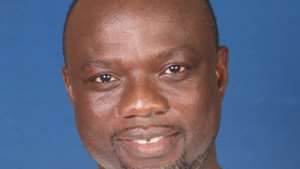 Folks, the political temperature in Ghana is gradually rising to unacceptable heights and must be condemned by all well-meaning people, especially if it results in negative happenings .

The news is that the NPP MP for Abuakwa North (Joseph Boakye Danquah) has been shot dead by unknown assailants. (See Abuakwa North MP gunned down).

This happening is disturbing, annoying, and problematic. It causes fear and anxiety. What exactly could have set this MP up for this dastardly act?

We have all along been sounding the note of caution that the kind of politics being done in Ghana, and the role of the MPs themselves, is too dirty and that unless the situation changes for the better, "anything" could go. And from the news report, that "anything" is gone. Too frightening!!

Immediate questions arise. What has this MP done to set himself up for such a painful death at the hands of "unknown assailants"? Could he have been doing anything as an MP to step on toes? Whose toes, anyway?

To be honest, I haven't heard much about this NPP MP to know the extent to which he would be targeted on the basis of political motivation. But who am I?

This incident is terrible and must be condemned by everyone who values human life. Being an MP is just an opportunity to serve one's country as such; whether one pleases society or not in that capacity is another issue. In truth, though, killing such a person this way is unacceptable.

Could the act be carried out by armed robbers? Or who else? Enemies within or without? What for, especially when this MP isn't known as one of those wielding power and influence to threaten anybody? I am saddened!!

We are concerned that our MPs haven't been performing well, but killing an MP this way (no matter which political divide he/she belongs to) is unacceptable.

This kind of murderous activity shouldn't be part of our Ghanaian collective. it is foreign, strange, and unbecoming.

Folks, we are beginning to see nasty happenings that, I am afraid, foreshadow the nastiness that awaits the country as Election 2016 approaches. Oh, why? Politics is about ideas and not the elimination of those participating in it. Can we in Ghana ever know this truth to be able to accommodate all kinds of political persuasions and politicians choosing to be what they want to be?

The police and other security agencies must act quickly to arrest the perpetrators of this dastardly act, and the law must take its course as such so they are dealt with expeditiously. The problem is that there is nothing concretely being done about gun production (take the Vane-Avatime gun industry as an example), gun possession, and gun use in the country. Our laws aren't working!!

A note of caution: Even though Ghanaians are politically divided, they don't expect their politicians to be murdered this way. After all, politics is all about a fruitful interchange of ideas on nation-building, not the physical elimination of opponents.

I hope that the truth will emerge for us to know who did this act. If not, then, serious danger looms. Who goes next?

If, indeed, this incident should be an eye-opener, then, it serves only one purpose: Our Parliamentarians themselves have to wake up to the reality that they are not doing well to enact laws and support other state institutions in interpreting and enforcing those laws to secure limb and property. The time for them to respond to the wake-up call is long overdue.

Building Ghana can be done in an atmosphere of lawfulness, not lawlessness, which enjoins the MPs to be up and doing. For far too long, they have been lackadaisical, mindless, and unsympathetic to the woes of the citizens constantly suffering from insecurity. Talk about the spate of armed robbery and wanton criminal acts against innocent civilians and the absolute silence from our MPs, and you should begin to know the depth of the problem.

Even, passing the laws on the "Right to Information" is impossible for these MPs. Yet, they turn round to do negative partisan politics with whiffs of information that they stumble upon, provided it will promote their agenda of political mischief. Eventually, they create needless enemies for themselves. What do they think they need to know and use for the narrow politicking that the individual Ghanaian not doing partisan politics doesn't? Their advantage to information, the ordinary deprived Ghanaian's woe!!

Will this murder of one of their own now wake them up to reality for them to act responsibly?

How about the government itself? Will it look over its shoulders to admit that it hasn't done enough to secure functionaries of the system? Elsewhere, known and acceptable political figures are given protection by the state security apparatus, be they for or against the government.

Here is a gripping aspect. The shooting to death of this MP is an act of terrorism (for as long as there is a political purpose involved-—which is a major determinant for anything qualifiable as terrorism). Will political opponents now use this incident as a confirmation of their fear that by bringing in the GITMO ex-detainees the government has opened the floodgates for hitherto-unknown and condemnable acts of terrorism to begin in Ghana?

Folks, the killing of a politician this way is foreign to Ghana, and must be condemned as such. Targeted killing is a terrible happening. Are we sure we know what to do to secure limb and property in Ghana? Too much to worry about at this time, folks!!

The first point is that he shouldn't have been killed. Our kind of politics is assuming frightening dimensions. If, indeed, nation-building is anything to go by, it shouldn't involve acrimony, violence, and this kind of hardline stance. After all, Ghanaians won't really care who solves their existential problems for as long as they can live in peace, harmony, and measurable comfort.

Ghanaians cannot be trusted when it comes to long-term memorable and gratitude/appreciation for their politicians. Ask the late Kutu Acheampong why he dismissed Ghanaians as “difficult people” and the Great Osagyefo why he would lament that if he had known that it was milk that Ghanaians needed (and for which the would support his overthrow), he would have made the streets of Accra flow with milk. Alas, it was too late to pick up the pieces.

How many people using the Kotoka International Airport in Accra, for instance, even care about the effigy of Kotoka standing there? Do they even have to remember who built the airport, who rehabilitated it when it was in a shambles, or whatever will happen to it in future before using it to get out of the country or enter it? All he cares about is that the facility that he needs to live his life is available for use; and he uses it with all the alacrity that he can muster up.

Sometimes, he even insults the one instrumental in providing that facility, especially if he happens to be a pensioner or someone paying tax but not knowing how his tax money is spent by the government. (Which government in Ghana has ever informed the tax payer about how the tax deductions are spent, anyway? Which tax payer ever gets to know how the income tax deduct ions ate effected? How about the death-throes that the pensioner goes through before getting his pittance to send him off into the world beyond?)

For what they are, Ghanaians are Ghanaians. When a Ghanaian in the rural area goes to use the KVIP facility, for instance, does he have to remember that it came into being under the Rawlings administration? No!! He just uses it and moves on. So is it with other development projects. The Ghanaian is a chameleon, changing colours to reflect personal inclinations when and where, and why. For good or bad, so is it. Politicians who don't recognize this fact work themselves into a frenzy and end up woefully. I wonder if this Abuakwa North NPP MP really read between the lines as such.

We in Ghana are still stuck on primitive issues about partisan politics, which our lazy, lousy, and clumsy self-seeking politicians exploit. That stance comes with a huge cost, though.

I hope the dastardly murder of this MP will open our eyes to the reality that has helped our democracies elsewhere grow to serve the interests of the people. May he begin to rest in peace, even as we wait for the authorities to unravel the truth and set our minds at ease.

Despite the challenges facing Ghana, it still remains a lovely country worth belonging to. Our leaders have to secure it as such.