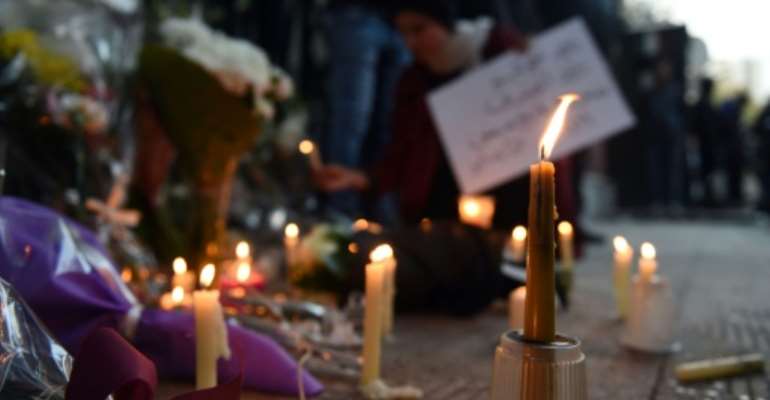 Activists and Italian nationals living in Egypt take part in a rally in memory of Italian student Giulio Regeni on February 6, 2016, outside of the Italian embassy in Cairo. By Mohamed El-Shahed (AFP/File)

Rome (AFP) - Italy demanded Monday that Egypt help ensure the killers of an Italian student are brought to justice, as Cairo rejected charges that the security forces were involved.

Rome said it would not allow the fate of Giulio Regeni to be brushed under the carpet as anger mounted over the Cambridge University student's torture and killing in Cairo.

With the media publishing gruesome details of Regeni's treatment and pointing the finger at Egyptian security services, Prime Minister Matteo Renzi was under pressure to authorise a state funeral for the slain 28-year-old.

Regeni disappeared on January 25 and was found dead on February 3. An Italian autopsy carried out following his corpse's repatriation at the weekend concluded that he was killed by a violent blow to the base of his skull having already suffered multiple fractures all over his body.

Foreign Minister Paolo Gentiloni said that Egypt appeared to be cooperating with a team of Italian detective and forensic investigators dispatched to Cairo.

But he warned: "We will not settle for alleged truths."

Gentiloni, in an interview with daily La Repubblica, added: "We want those really responsible identified and punished on the basis of law."

"This did not happen," Magdy Abdel Ghaffar said at a press conference when a reporter asked if Regeni had been arrested by the police.

La Repubblica reported that, as well as being systematically beaten, Regeni had his finger and toe nails pulled out in a pattern of torture which the daily said suggested that his "death squad" killers believed him to be a spy.

Regeni was in Egypt working on a doctoral thesis on Egyptian trade unions. It has emerged since his death that he was also writing, under a pseudonym, for a communist Italian daily Il Manifesto, fuelling speculation that links to local opposition figures may have resulted in him being targeted.

Regeni, whose studies included Arabic and Arab literature, was last seen as he left his home on the fifth anniversary of the Arab Spring uprising that ended longtime autocrat Hosni Mubarak's 30-year reign.

Cairo was almost deserted that day, as Egyptian authorities clamped down across the capital.

Italian officials' anger over Regeni's death was exacerbated by their being initially informed the student had been killed in a road accident.

- Punch in the stomach -

Interior Minister Angelino Alfano has been particularly outspoken, describing seeing the results of the autopsy as a "punch in the stomach" and Regeni's killers as "inhuman and animalistic."

Alfano said he was in favour of Regeni being given a state funeral later this week.

"There is a protocol to be respected and the President of the Council of Ministers (Renzi) decides, but I would say this is about the death of a young man who honoured all of Italy and the idea of a state funeral should be taken very seriously."

Renzi faces a difficult balancing act in handling the fallout from Regeni's death. Too much overt criticism from Rome of the military-backed regime in Cairo could jeopardise the hopes of the murder inquiry ever getting to the truth.

Italy also has major business interests in Egypt and will need Cairo's support if a planned Italian-led peacekeeping force is sent into neighbouring Libya to help stabilise the country, if and when a new national unity government is established there.

"Egypt is our strategic partner and has a fundamental role in the stabilisation of the region," Gentiloni said.

"But here we are confronted with a different problem, the duty of Italy to defend its citizens and to ensure that when they are victims of crime, the guilty are brought to justice."

"People are jumping to the conclusion that he was interrogated but that has not been proven," he told Corriere della Sera's Sunday edition.