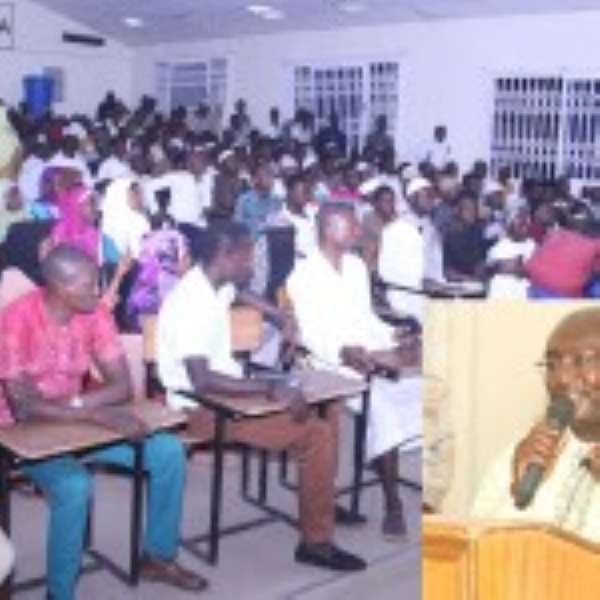 Alhaji Dr Mahamudu Bawumia, vice presidential candidate of the NPP, has cautioned Ghanaian Muslims to be on guard against extremists and their influence, and appealed to the Muslim community to shun all divisions and continue to co-exist peacefully with the majority Christian population as it is the only way to guarantee the stability of the nation.

These comments were contained in a lecture titled: 'Islam In The 21st Century: The Role of Muslim Youth In Combating Extremism & Radicalism For Political Stability', delivered at the 9th annual congress of the Ghana Muslim Students Association (GMSA) of the University of Development Studies (UDS) on Friday.

“As young people, we ought to guard against the evils of exclusivism. It is important that we realise that if Allah so desired He would have made all of us one people. But as He states in the Qur'an, He allows us to wallow in our differences, which He shall settle on the Day of Judgment.

“There shall be no compulsion in religion” so states the Qur'an. Let us therefore respect one another's views on matters of religion. Intolerance in matters of religion is what breeds extremism and radicalism, which triggers political instability,” he said.

.
Touching on the relationship between faiths, Alhaji Dr Bawumia explained that radicalism and extremism are the products of exclusivism and intolerance.

“In Ghana especially, the majority of the people live by the Christian faith. There cannot be peace and stability in Ghana except us, as Muslims co-exist peacefully with our Christian brothers and sisters. What feeds extremism and radicalism is the idea that there is only one way to God. While we are entitled to believe in the rightness of our way, we cannot seek to annihilate views that are opposite to ours. Radicalism and extremism are the products of exclusivism and intolerance,” he pointed out.

The NPP running mate, delivering what was subsequently described as a well-researched scholarly Islamic piece by other speakers, explained that Islam itself is very tolerant of Christianity and pointed to various examples in the Qu'ran to make this point.

“Islam itself is very tolerant of Christianity. The first wave of Muslim migration to escape the persecution of the Makkans who opposed the nascent religion of Islam, was to Abyssinia (modern day Ethiopia). At that time the Prophet advised his followers to migrate to Abyssinia because a Christian King rules.

“When the Makkans sent a delegation to appeal to the Negus of Abyssinia to extradite the Muslims and when the Muslims were called upon to say why they should not be extradited, their spokesperson, Jafar bin Abu Talib, quoted copiously from the 19th chapter of the Qur'an as his defense. The 19th chapter of the Qur'an is called the chapter of Mary (Suratul Maryam). Indeed Mary is the only woman mentioned by name in the Qur'an and the chapter acknowledges the prophet-hood of Jesus, his special relationship with God, including the fact that he spoke from his cradle in defense of his mother when sections of her people thought that she had engaged in adultery; an incident that is not even mentioned in the Bible.”