He Is Not Really Banning Politicians From Campaigning In His Township 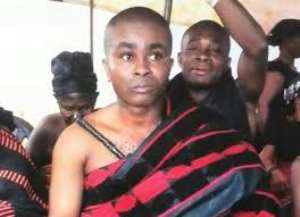 He is simply doing what every rural-community chieftain ought to be doing – boldly and vigorously demanding his people’s justifiable share of the proverbial national cake. His name is Nana Odiasempa Kwaku Boadu; and he is Chief of Adrobaa in the Tano-North District of the Brong-Ahafo Region (See “Election 2016: BA Chief Bans Politicians” Starrfmonline.com / Ghanaweb.com 2/2/16).

He says that skirt-and-blouse political culture is making it extremely difficult for the lives of the residents of his farming community which is engaged in a year-round commercial cultivation of vegetables and other food crops, including maize, yams and cassava.

He is only asking that the three-mile laterite road spanning the townships of Adrobaa and Tekyire or Terchire be tarred and made permanently motorable, so that the farmers of his township could readily transport their produce to the large local markets so as to enable them to comfortably fend for themselves.

Now is this not an all-too-reasonable demand to make? Well, what is also significant to note here is the fact that Nana Kwaku Boadu is not asking for any handout from the government headquartered in Accra; he is only demanding that his village, or township, and its residents be made an integral part of the modern state of Ghana. After all, what is the use of a government that is incapable of facilitating the easy transportation of farm produce to the urban communities that need it most?

Nana Odiasempa Kwaku Boadu is not even demanding the establishment of silage facilities in his community from the government, facilities that would have eased up this acute and perennial problem of food transportation a considerable bit. To be certain, the problem of silage is perhaps the most important issue confronting the Ghanaian commercial farmer.

There is also, of course, the age-old Fulani menace of the massive and merciless destruction of cultivated farmlands and the rampant sexual violation of our rural farming community women.

Recently, someone even suggested that the government call for the immediate intervention of the United Nations in order to facilitate the amicable resolution of this seemingly intractable problem of the wanton predatory activities of the nomadic population of cattle ranchers and rustlers in the West African sub-region. That would likely take forever to bring about.

But, of course, there is a Resident Director of the United Nations Development Program (UNDP) in the country who could be prevailed upon to readily step in and offer a helping hand. Or even rapidly communicate this Fulani menace to headquarters. For this is undoubtedly a morally and economically disturbing problem. It is also a security menace with a remarkable human rights edge to it.

As we all know, the Fulani are culturally and economically not indigenous to Ghana and thus ought to be promptly made to fully appreciate the fact that while, indeed, they have a right to have their livestock and their persons protected from the hardscrabble existence of life in the Sahel regions of the West African sub-region, nevertheless, such rights of protection do not supersede those of the residents of their non-Sahelian host communities and countries.

In the meantime, while the Ghanaian people await a lasting inter-governmental solution to the problem, the Fulani predators ought to be pushed back to wherever they originally belong in the West African sub-region until such time that the proper amicable settlement and/or solution is found. This ought to be among the top-most priorities of the Mahama-led government of the National Democratic Congress.

Now, where the jarring interference of the regressive politics of skirt-and-blouse comes in, to hear the Chief of Adrobaa township tell it, is that development projects slated for Adrobaa and its environs appear to have been deliberately put on hold because while the Member of Parliament for the Tano-North District is affiliated with the country’s main opposition New Patriotic Party, the local executive representative of the government and administrator belongs to the Mahama-led National Democratic Congress, and was in fact handpicked and posted to the Tano-North District by President Mahama himself.

In sum, what Nana Odiasempa Kwaku Boadu clearly appears to be implying is that the Mahama government may well have decided to deliberately stall the schedule of development projects in Adrobaa township and its environs, so as to render the constituency’s Member of Parliament unpopular, with the ultimate strategic goal of having the latter replaced at the polls by one sponsored by the National Democratic Congress. There is a tired African proverb that observes that “When two elephants fight, it is the grass that suffers.” In our particular context, this proverb could be slightly modified to read thusly: “When an elephant and an umbrella tussle, it is the people of Adrobaa who invariably receive the short end of the legendary stick.”

Needless to say, the preceding skirt-and-blouse political anomaly makes a strong and incontrovertible case for the direct election of both Members of Parliament and District Chief Executives.

It is highly likely that if both the MP and the DCE of the Tano-North District of the Brong-Ahafo Region were duly elected by the people of this enclave of hardworking farmers and civil and public servants, we would not be dissertating over such a patently basic question of macadamizing the three-mile stretch of laterite road linking Adrobaa with Tekyire or Terchire at this most ungodly hour – i.e. 3:36 am.

We also hope that both our elected representatives in Parliament and at the Flagstaff House are reading and listening to this column with sedulous attention. Think Ghana, Think Development!