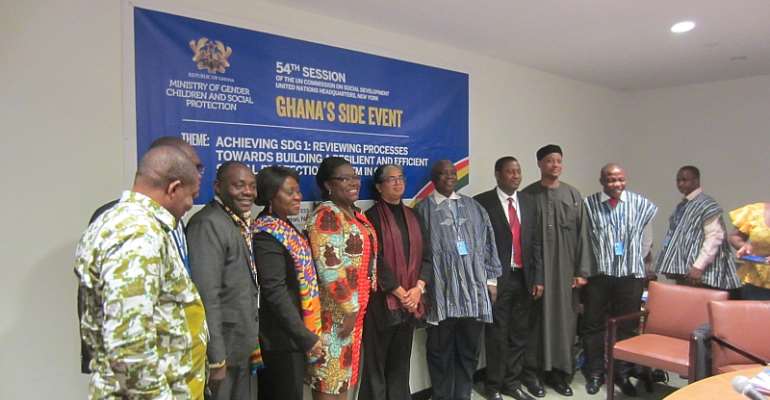 Minister for Gender, Children and Social protection, Nana Oye Lithur (4th from left) in a picture with some of the invited guest at the event.

Ghana’s Minister of Gender, Children and Social Protection, Nana Oye Lithur has announced that the poverty level in the country has been reduced from 51.7 per cent to 24.4 per cent as a result of a number of social protection measures and strategies introduced by the government.

Addressing a side event organized by her Ministry on the sidelines of the 54th session of the Commission on Social Development, taking place at the United Nations headquarters in New York, on Friday, (January 5, 2016) Nana Oye Lithur said that a social protection policy is being developed through continuous reform of structures, institutional arrangements, systems and processes that had resulted in the creation of a legal and policy framework.

Aside these, she mentioned that the development of an institutional and governance framework from the regional, district and community levels had led an efficient management in the implementation of social protection interventions in youth employment, school feeding, national health insurance among others.

In order to effectively and efficiently identify and select the beneficiaries of the various interventions, the Minister stated that a Ghana National Household Registry Database is being established to ensure that the actual beneficiaries are reached.

The electronic disbursements to beneficiaries and service providers of social protection interventions are some of the other transparent and coordinated approaches that had yielded fruitful results.

For example, the Minister disclosed that the collaboration with the World Bank, European Union, Brazil, various Ministries and the private sector had helped the Ministry to target and register extremely poor households in 188 out of 216 districts taregeted onto the National Health Insurance Scheme(NHIS). In addition, more than 1.7million school children who benefit from the Ghana School Feeding programme in 5000 schools are being registered on to the NHIS.

The moderator for the programme, Ambassador Martha Pobee, Ghana’s Permanent Representative to the United Nations, commended the Ghanaian delegation for sharing the best practices in the key components of Ghana’s Social Protection Policy, which had yielded impressive and encouraging results in meeting critical targets including eradicating poverty, hunger, improving education, health outcomes and other challenges in social development.

She lauded the presence of the MPs from the majority and minority sides and their collaboration with the Ministry to achieve its set objectives, an attestation that Ghana’s vibrant democracy is a model one.

So far, he pointed out that it had helped to reduce undesirable duplication, increased transparency, accountability and himproved coordination, apart from assisting in the enrolment of social interventions.

On the school feeding programme, Mr. Felix Kwaku Logah, head of the Operations of the Livelihood Empowerment Against (LEAP)programme, said it had increased school enrolment, attendance, retention, reduced short term hunger and malnutrition among the kindergarten and primary school children aside boosting domestic food production.

For the long term, it has also reduced poverty and increased food security, he stated.

Other institutional arrangements are the use of non-state actors as watch-dogs, advocates, partners, initiators, and validators such as chiefs, nongovernmental organizations and organized labour.

At her turn, Ms. Vidhya Ganesh, Deputy Director of the UNICEF, the chair for the function called for honesty and transparent partnerships if the SDGs, which are aimed at poverty eradication are to succeed.

In this vein, she assured Ghana of the continuous support and collaboration of UNICEF in achieving the SDGs and for a brighter future.

The chairman of the parliamentary committee on Employment, Social Welfare and Enterprise, Mr. Joseph Amenowode pointed out that Parliament and the Ministry had a joint objective of eradicating poverty, adding that this explains why most of the progammes of the Ministry has a by-partisan support.