Court to probe 'outing' of secret witnesses in Gbagbo case 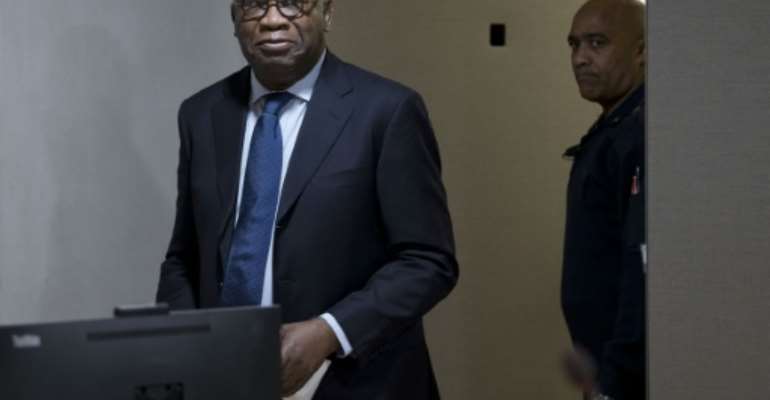 Former Ivory Coast president Laurent Gbagbo arrives for the start of his trial at the International Criminal Court in The Hague on January 28, 2016. By Peter Dejong (Pool/AFP/File)

The Hague (AFP) - The International Criminal Court said Saturday it will probe how the names of at least four confidential witnesses in the trial of former Ivory Coast president Laurent Gbagbo were accidentally revealed this week.

Friday's incident in which a closed session of Gbagbo's crimes against humanity trial was mistakenly broadcast on the court's public channel "will be investigated", the ICC's head of public information Sonia Robla told AFP.

A clip of the hearing widely circulated on social media including Fon the YouTube video channel, shows ICC judge Cuno Tarfusser calling for the trial to go into a closed session at the request of lead prosecutor Eric MacDonald.

But the microphones are left open and MacDonald can be heard saying that he wanted to raise the issue of witness protection.

Due to security concerns about the identity of witnesses the ICC has been monitoring social networks such as Facebook and Twitter, he says.

"Certain bloggers, journalists and members of the public" following the case in the public gallery or on the Internet are "posting live commentary" about the case on Twitter, MacDonald tells the three judges.

These bloggers "are trying to find out the identities of witnesses 9, 10 and 11," MacDonald said according to the French translation of his comments in one YouTube clip.

But he then goes on to pronounce the names to the judges, which could clearly be overheard on the public channel.

The blunder was front-page news in both the pro- and anti-Gbagbo press back in Ivory State.

"Scandal at the ICC," wrote the pro-Gbagbo Notre Voie daily.

The Nord-Sud paper, close to the ruling presidency, spoke of "Total panic in the Gbagbo camp".

"Yes, I am on the witness list," one of the witnesses told Notre Voie. "But people don't know if I am a witness for the prosecution or the defence. I am a politician , I have experienced the events and I know what I have to say," he added.

Friday's incident is not the first in the trial of Gbagbo and his former firebrand youth militia leader Charles Ble Goude.

On Wednesday, the prosecution's first witness, P547, accidentally gave his name as he told how forces loyal to Gbagbo allegedly fired on unarmed protesters.

Judge Tarfusser immediately halted proceedings and ordered journalists not to use the witness's name. Reporters also had to give their names to ICC security officials.

Gbagbo and Ble Goude have denied four charges of crimes against humanity after 3,000 people were killed following a disputed Ivory Coast presidential vote in late 2010.

Their highly-anticipated trial opened on January 28 in the court based in The Hague and is set to last three to four years.

Gbagbo declared himself the winner of the November 2010 elections, but major powers including France, the former colonial power, the United States and the United Nations backed Alassane Ouattara, who snatched a narrow victory.

The row triggered a bitter standoff that led to clashes on the streets of Abidjan.

Witness protection is a cornerstone of how the ICC operates as it seeks to bring to justice those responsible for the world's worst crimes.

Many witnesses fear reprisals if they give evidence against those on trial, and the ICC tries to shield the identities of those at risk -- even sometimes moving them to different countries to start a new life.pvh