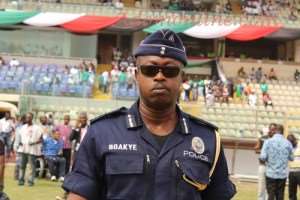 A member of the Ashanti Regional Election Taskforce of the ruling National Democratic Congress (NDC) and ex-deputy National Coordinator of GYEEDA, Alhaji Alhassan Tapsoba, has, once again, jumped to the defence of the Ashanti Regional Police Commander, DCOP Nathan Kofi Boakye, following criticism by some Members of Parliament (MPs) over his threat to arrest the MP for Agogo, Kwadwo Baah Agyemang.

The tough-talking Police Commander came under a barrage of criticism from some MPs, particularly, those on the side of the Minority, after issuing a threat to cause the arrest of the Agogo MP, who he accused of inciting residents against Fulani herdsmen operating in the Agogo community.

The action of DCOP Kofi Boakye followed what he said was the deliberate incitement of the youth of Agogo to take arms against Fulani herdsmen, who are allegedly terrorising residents of the community.

The legislators, however, faulted the police boss for publicly threatening a Member of Parliament, and even contemplated dragging him before the Privileges Committee to answer questions. Subsequently, there are reports of threats against the decorated Police Commander, a situation which has compelled some leading members of the NDC to jump to his defence.

Speaking to The Chronicle in an interview, the former GYEEDA Coordinator said the treatment being meted out to DCOP Kofi Boakye was highly unfair, contending that the Ashanti Regional Police boss was only doing his job as an enforcer of law and order.

He argued that as a Police Commander, his job was to ensure security for all persons in Ghana, irrespective of their nationality, and therefore, any attempt to intimidate him for executing his duty was unfair.

Alhaji Tapsoba, who openly condemned some members of his party for calling for the transfer of the Police Commander, warned of dire consequences for the security of this country, if the police are not allowed to execute their task without any interference.

According to him, he wondered why the public had refused to condemn the MP, Kwadwo Baah, who is constantly creating an atmosphere of insecurity in the Agogo community. He said not only was the MP inciting the youth to attack the Fulani herdsmen, he was also encouraging them to show gross disrespect to the Paramount Chief of the Agogo Traditional Council, Nana Akuoko Sarpong.

“Why should the public gloss over the unacceptable attitude of a whole MP who continues to show gross insubordination against traditional authority,” he questioned.

Alhaji Tapsoba further asserted that the MP’s action was politically motivated, alleging that he had picked intelligence of a plot by the opposition party to prevent people of northern descent living in the Agogo community from participating in the upcoming limited registration exercise.

“As a member of the election taskforce of the NDC, our checks indicate that if the youth carry through their action, lots of innocent voters will be affected, because some of these people have family members who are legitimate Ghanaians,” Alhaji Tapsoba alleged. He, therefore, warned members of the ruling party from joining the dirty campaign of the NPP and other selfish individuals to smear the hardworking Police Commander.