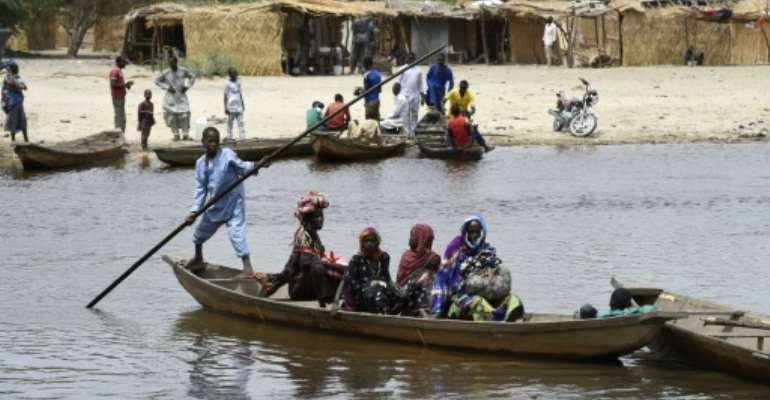 People cross a branch of Lake Chad on April 6, 2015, in N'Bougoua, which was attacked by Boko Haram. By Philippe Desmazes (AFP/File)

Paris (AFP) - Switzerland on Wednesday said it had not given any funding to military operations against Nigeria's Boko Haram Islamist insurgents, after a senior African Union official said it was among donors to an international intervention force.

Boko Haram, facing the heat of a military onslaught in Nigeria, has in the past year stepped up cross-border attacks in Niger, Chad and Cameroon, while continuing shooting and suicide assaults on markets, mosques and other mostly civilian targets within Nigeria itself.

At a donor conference in Addis Ababa on Monday, AU Peace and Security Council chief Smail Chergui said Switzerland had contributed to funding for the force battling Boko Haram in the Lake Chad basin.

"As a neutral actor in conflict situations, Switzerland has never given financial support to military interventions and will abstain from doing so in the future," the Swiss foreign ministry said in a statement sent to AFP by its embassy in Paris.

The statement said Switzerland had given around $12 million to alleviate the suffering of people affected by the Boko Haram crisis, but claims it was funding the military force were "incorrect".

"Switzerland's action in the Lake Chad region consists solely and exclusively in the financial support to the major humanitarian agencies," it said.

Donors at the meeting in the Ethiopian capital pledged $250 million for the fight against Boko Haram, with major contributions made by Nigeria, Britain and the European Union.