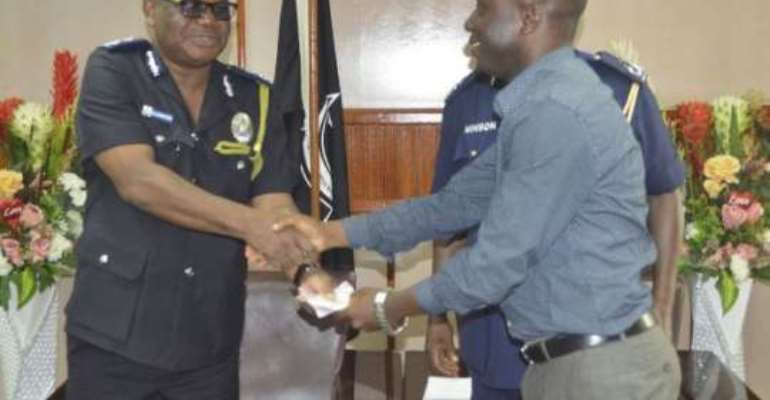 Accra, Feb. 3, GNA - The Inspector General of Police, John Kudalor says the Police will collaborate with Mr Ibrahim Oppong Kwarteng, Ambassador Extraordinaire of Prisons, in his effort to sensitise the public on the consequences of crime through prison documentaries.

He said the initiative would greatly complement efforts of the police in the fight against crime in the country.

Mr Kudalor was speaking during a courtesy call on him in Accra by Mr Kwarteng on Tuesday.

The visit was to seek audience with the IGP and discuss his upcoming television show titled "Time with the prisoner" on Ghana Television and also obtain support for his campaign.

The Ghana Prisons Service Council conferred on Mr Kwarteng, "Ambassador Extraordinaire" for his dedication in projecting the welfare of prisoners and the deplorable prison conditions across the country.

The IGP said the Community Policing Unit would join hands with the Prisons Ambassador Extraordinaire in his roll out of the 'National Stop Crime Campaign'.

Mr Kudalor was happy with the initiative being championed by Mr Kwarteng under the auspices of his NGO, Crime Check Foundation.

He said the Police will partner the ambassador in his quest to fight crime in the country.

In response to an appeal by Mr Kwarteng to impress on the police against dumping suspects on remand without taking them to court, the IGP described the practice as inhuman and promised to curb it.

Mr Kwarteng said the campaign was to educate the youth about the deplorable prison conditions to deter them from engaging in crime.

He later told the Ghana News Agency that he would take the campaign to churches, schools and mosques to share with the public the living conditions of prisoners.

'Majority of the youth do not have any idea about prison living conditions,' he said.

Mr Kwarteng's latest documentary on prison conditions titled 'A Neglected Potential' moved the President, John Dramani Mahama to the Nsawam prison to see at firsthand, the deplorable living conditions to enable him to push for a higher budgetary allocation for the Prisons Service.

He said over the years much has not been done to project the plight of the service, hence his interest to focus on the prisons.