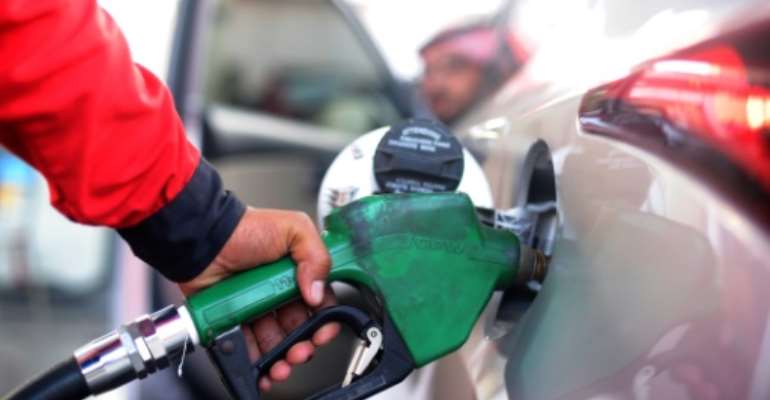 Austerity measures, loan negotiations and state asset sales are all on the menu of moves deployed to counter the brutal nosedive in the oil price. By Amer Hilabi (AFP/File)

Paris (AFP) - Oil producing countries are scrambling to fill gaping holes in their budgets torn by crashing petroleum prices, with some turning to international lenders for help and others slashing spending.

Austerity measures, loan negotiations and state asset sales are all on the menu of moves deployed to counter the brutal nosedive in the oil price, with West Texas Intermediate currently below $30 a barrel and Brent just above -- a drop of about 70 percent since June 2014.

"These are bad times for oil producers and their creditors," Gabriel Sterne, head of global macro research at Oxford Economics, said in a note.

National budgets need to adjust further, financial buffers are inadequate and proper adjustment to the new situation may be delayed by weak governance, he warned, calling the assessment "bleak".

In Russia, which depends on oil and gas sales for half of government revenues, Economy Minister Alexei Ulyukayev on Tuesday warned that his country's budgetary situation was "critical" and that it was now urgent to implement a privatisation programme that is expected to feature sales of stakes in state-owned companies such as oil giant Rosneft.

"It is no longer possible to wait," he said, just as Russia -- a top global producer -- was pumping oil at record levels to offset falling prices with increased volumes.

The government in Moscow has already admitted that tumbling oil prices will push it to slash spending as it struggles to keep the deficit to under three percent of gross domestic product.

Trying to reduce spending regardless would be "a source of risk", he told AFP.

Last month, the International Monetary Fund warned that the sharp collapse in the price of oil is proving more of a drag on the global economy than a stimulus, pointing to the dire budgetary situation that oil exporting countries now find themselves in.

There are big differences between the various oil-exporting countries, many of whom had accumulated vast dollar reserves while the going was good in the commodities markets.

But even the world's biggest exporter, Saudi Arabia, is feeling the pain.

The kingdom reported this week that its fiscal reserves dropped to a four-year low of $611.9 billion last year, from $732 billion in 2014, as the government sought to finance a budget deficit caused by plunging oil revenues.

In December, Saudi Arabia had reported a record deficit and announced austerity measures, including cuts to fuel subsidies.

African producer Nigeria, meanwhile, boasting no such reserves, is seeking loans from the World Bank, the African Development Bank and other lenders to help cover this year's massive budget deficit, the government and bank officials said on Tuesday.

The budget plan, which includes sharply increased spending to stimulate the economy, calls for 1.8 trillion naira ($9 billion) to be covered by borrowing from multilateral organisations -- which the government believes is the cheapest funding option.

The possibility for cash-strapped nations like Nigeria to get a friendly hearing from global lenders means that situation is perhaps not yet dramatic, according to Ludovic Subran, chief economist at Euler Hermes.

"Today, exporters in Africa have enough foreign reserves for at least another year. The others are being helped by international institutions," he told AFP.

Maybe so. But while some countries may obtain "soft loans" to tide them over, other credit lines come with strings attached, notably austerity measures or forced asset sales -- and therefore the danger of social trouble from already impoverished populations.

"The room for manoeuvre is very limited. Growth is slowing and adjustment is very costly because of austerity and the recession," Christine Rifflart, an economist with French think tank OFCE said in a recent report.

Venezuela, which is sitting on the biggest known oil reserves from which it derives 96 percent of its foreign revenues, has been devastated by the drop in prices.

"The economic crisis in Venezuela will deepen," analysts from research group Capital Economics wrote in a recent note. "In the absence of a renewed rebound in oil prices a government debt default looks increasingly likely."

But several OPEC countries, lead by Saudi Arabia, have resisted calls to cut production, preferring to defend their market share rather than prices.