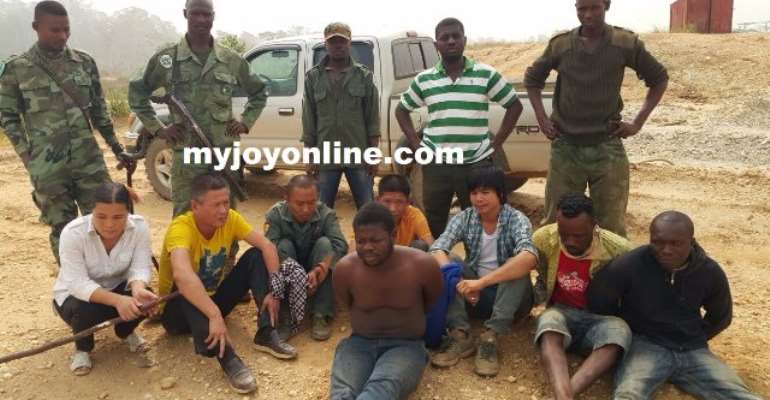 The illegal miners after their arrest

Personnel of the Forestry Commission appear helpless at the destruction of forest reserves by Chinese nationals engaged in illegal mining.

Their sentiments are premised on what is believed to be official connivance with the foreigners to breach the country’s mining laws.

It comes as Bekwai Police Divisional Command arrested five Chinese and three Ghanaians in a recent swoop in the Apamprama Forest Reserve in the Ashanti Region.

At the time of the arrest of the latest suspects, they had caused damage to the Koboro portion of the forest reserve in the Amansie Central District.

Authorities seized two excavators used in the forest by Sasha Wu, Fung Mao, Zhang Ihai, Li-hang and Shaipam, together with their Ghanaian collaborators.

The Ghanaians are Albert Ampong, Yankey Alfred and Iddi Baba.

Nhyira News investigations revealed the group has strong political backing as some government officials push for their release from custody.

“In Ashanti region it’s very common especially the Bekwai Forest District and Nkawie Forest District. We have the indigenous artisanal miners who use simple pans and shovels to move in; and then we have these high level illegal miners who move in with heavy machinery”.

The Nkawie Circuit Court on January 8, 2015 fined three Chinese and a Ghanaian GHC109,000 or in default serve a 3-year jail term for mining in the Asananyo Forest Reserve at Nyinahin believed to be the biggest reserve in Ghana.

The illegal miners, according to Nhyira News checks have spies all over who feed them with information, especially on the schedules and movements of Forestry Task Force and other security agencies. With this plan carefully executed, they are able to escape arrest.

Mr. Eshun has described as impunity, the extent at which some Ghanaians will go to destroy the country’s environment.

“It beats my imagination that with all the education going round, climate change and all this people mine our forest reserves. The surprising thing is the Chinese coming in, and they are led by high people in society”. Worried Mr. Eshun lamented.