Student who threatened to kill US Ambassador to Ghana in court 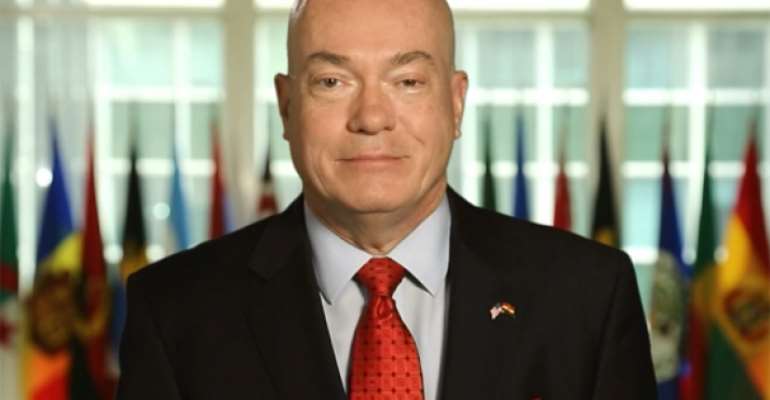 A graduate of the Kwame Nkrumah University of Science and Technology, Jones Kyei Nyarko, who was said to have threatened to shoot on sight the newly posted United States Ambassador to Ghana, Robert Jackson has been arraigned.

Nyarko was said to have been put before an Accra Circuit Court presided over by Mrs Patricia Quansah, Monday's edition of the Daily Guide newspaper reported.

He has been charged with threat of death after he posted the following on his Facebook timeline: "I would shoot him if I should see him [The US Ambassador]."

The suspect, said to be a National Service person at the Ejisu M/A Experimental School in the Ashanti region, pleaded not guilty and is on a GhÈ»500,000 bail with two sureties while the case has been adjourned to February 19, 2016, the newspaper reported in its Monday February 1, 2016 edition.

ASP Cynthia Anderson, the prosecuting officer was said to have told the court that the complainant was the newly posted American Ambassador to Ghana while the suspect is a graduate currently doing his National Service.

According to the prosecutor, the suspect created an account on Facebook and had been posting his views on both private and public issues on his timeline, adding that he had been 'liking' other comments from other persons as well.

She said on January 15, 2016 the American Embassy in Ghana posted news including a video on the appointment of the complainant and his arrival in the country on its official Facebook page and a friend of the suspect liked it, adding that on January 19, 2016 the suspect clicked on his page and saw it.

She continued that the suspect then threatened the Ambassador with the following words: "Who cares! All whites are bad. I would shoot him if I should see him.'

She said the Embassy, upon seeing the threatening message, reported the matter to the police for investigation and the police intelligence revealed that he was at Ejisu. He was consequently arrested but nothing incriminating was found in his room.

The police officer said the suspect admitted he posted the words but had no malicious intent but he was arraigned after police concluded investigations.