In a Khartoum kitchen, a pharmacist serves up a Sudanese rarity: a cookbook 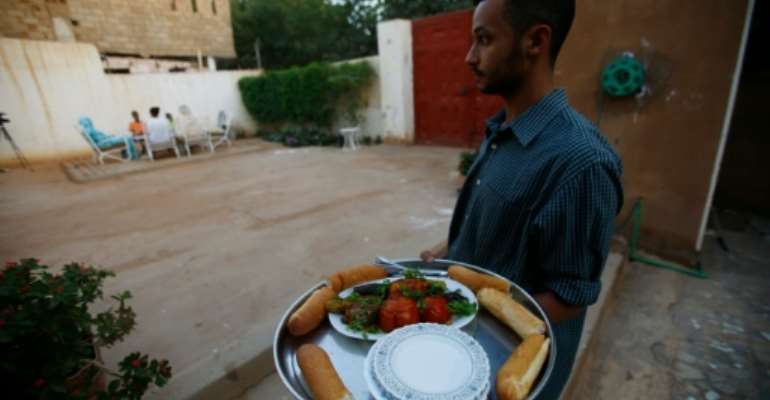 Khartoum (AFP) - Preparing vegetables in a quiet Khartoum neighbourhood, pharmacist Omer Eltigani hopes not just to serve up the dish an aunt is teaching him, but also the first cookbook to bring Sudanese cuisine to the rest of the world.

Straddling Africa and the Arab world, Sudan's cooking has not tickled foodies' palates as much as its Ethiopian neighbours or Levantine rivals.

But with his aunt Salwa watching on from the corner of the kitchen in his grandparents' house as he stuffed courgettes, aubergines and tomatoes, Eltigani said he hopes to change this with his cookbook, the country's first not written in Arabic and aimed at foreign diners.

The project -- dubbed Sudanese Kitchen -- was originally born of his homesickness.

Eltigani, who was born in Dublin, then lived in Khartoum until he was seven, when he moved to Britain. Wherever the family went he had his mother's home cooking until he went to Manchester to study pharmacy.

"I was living at uni and I really missed my Mum's food, so I would go home and ask her for recipes that were my favourite things," the lean, unshaven 31-year-old said, taking a break in the kitchen.

"I just got the idea of writing down what I was taking with me and making it while I was at uni."

He learned to cook from scratch, starting with the dish he missed the most -- the local variant of lamb meatballs popular across the region, served in a thick Sudanese tomato and garlic sauce.

He started sharing his recipes with cousins, eventually setting up a website (www.sudanesekitchen.com) and found people from all over the world were interested in trying his recipes.

In October, he decided to dedicate himself to writing the book, quitting his job and travelling to Khartoum in January for a 10-day research visit.

- Politics at the table -

From his aunts' house, he has been collecting family recipes, cooking with his two aunts, and visiting restaurants, markets and museums to gather background he hopes to include in the book.

"It's about placing the food in its context," Eltigani said.

The book will include around 40 recipes and is aimed at foreigners and also Sudanese looking to learn more about their country's cooking.

But his insistence on tying cooking to Sudan's turbulent history has made difficulties in finding publishers in Britain, who would prefer just a book of plain recipes, he said.

"You can't really not talk about politics and talk about Sudan," he shrugged.

Mixing Arab and African influences, Sudan was colonised in the 19th century by the Ottomans and then by Britain and Egypt jointly until 1956. Its post-independence history has been blighted by civil war, military dictatorship, unrest and poverty.

Each period has affected the way Sudanese people eat, Eltigani said, a fact he wants to be central to his book.

But he also hopes the richness of Sudan's cuisine will win it fans around the world.

"What grows in the area, that definitely shapes what is made here," he said, heading back to the kitchen in his aunts' house.

In the troubled Darfur region, the locally grown sorghum grain is milled to form assida, a porridge-like lump served with stews, while groups living along the Nile eat tilapia and Nile perch caught from the river, marinated and often served with a rocket salad.

The importance of cooking with his family is that Sudan's best food is not to be found in restaurants or at food stalls lining the capital's streets.

"For me Sudanese cooking is from the home," Eltigani said after he had finished stuffing the vegetables with rice, minced meat, dried coriander and raisins.

Foreigners in Khartoum can enjoy delicious Nile fish or fuul -- cooked fava beans flavoured with cumin and olive oil -- in restaurants but they will never try the best unless they eat with a family, he says.

Eltigani's aunt Salwa, dressed in bright traditional robes, has been happy to help out, and thinks the project is "excellent".

"It's a strange thing, something nice," she smiled.

With the stuffed vegetables cooked, Eltigani carried them on a tin dish to his young cousins and aunts sitting round a table in the house's communal courtyard in the early evening light.

They helped themselves to the dish in appreciative silence, as Eltigani said he hopes to finish the book around April.

As the family ate from the shared tin tray, he admitted that his favourite part of Sudanese cooking will be hard to convey in his book.

"The dishes made are made for sharing," he said, wiping his fingers after taking a bite from a stuffed potato dripping with red sauce.

"When you're eating together you feel like you're part of a community."