'Major risk' of IS crossing Mediterranean with refugees: French minister 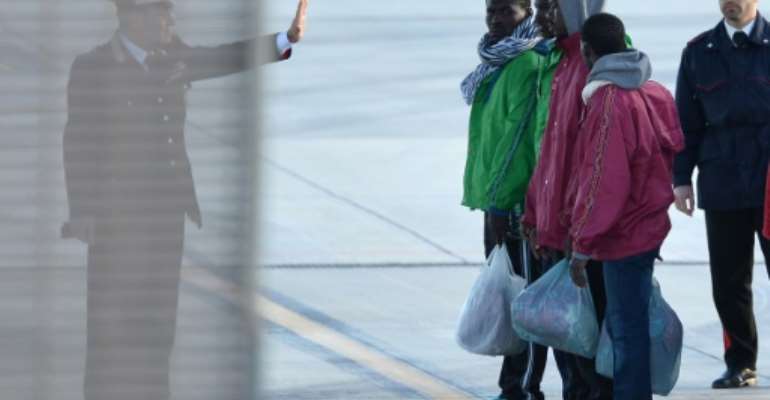 An Italian policeman gives instructions to migrants before they board a military plane to be transferred on February 17, 2015 at the Lampedusa airport. By Alberto Pizzoli (AFP/File)

Le Drian said there was an "urgent" need for a political solution to the crisis in Libya to help combat the spread of the Islamic State group (IS), which now has several thousand fighters in the North African country.

"Daesh is installing itself," Le Drian told French TV, using the Arabic acronym for the IS group.

"I have been very worried about Libya since September 2014. They are there, nearly 300 kilometres from the coast, and they are spreading."

He said that put IS only 350 kilometres from the Italian island of Lampedusa, the arrival point for thousands of migrants and refugees leaving Libya for the European Union.

"When good weather comes to the Mediterranean, there is the risk that (IS fighters) could make the crossing, mixing in with refugees. It's a major risk," said Le Drian.

"Everyone is aware of the danger of transferring the conflict in the Levant (Syria and Iraq) where we are starting to see some positive elements, to a new conflict in Libya," he said, adding that a political solution was the "only way to eradicate" the problem.

"There must be a government of national unity. There's a serious political process under way, supported by the UN Security Council. I think it's urgent."

Libya has been in chaos since the 2011 ouster of longtime dictator Moamer Kadhafi. It now has two governments and parliaments, with the recognised authorities based in the eastern city of Tobruk and a militia-backed authority in Tripoli.