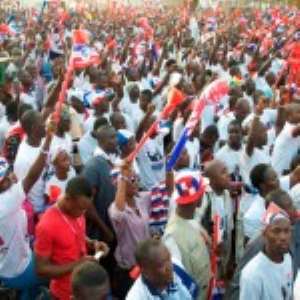 The angry supporters vowed to do everything possible to prevent one of the parliamentary aspirants, Joseph Mensah, from contesting the party’s primary in the area.

According to the demonstrators, who were mainly Electoral Area Coordinators, they do not know Joseph Mensah as a member of the NPP in the constituency.

“We will therefore not sit down for a stranger to vie for the position of a parliamentary candidate of the party in the Kwesimintsim constituency,” they stressed.

Joseph Mensah and the sitting Member of Parliament (MP) for the constituency, Joe Baidoe Ansah, filed their nominations to contest the primary, which was expected to have taken place on Saturday, June 13, 2015.

The parliamentary primary was postponed as a result of a dispute over the eligibility of Joseph Mensah to stand for the election.

After the party’s parliamentary vetting process in the constituency, the NPP announced the disqualification of Joseph Mensah, which prompted the aspirant to go to court to seek redress.

Joseph Mensah filed a motion for injunction to restrain the party from holding the election following his disqualification from the contest.

After a protracted court hearing, a Sekondi High Court placed an injunction on the NPP parliamentary primary in the Kwesimintsim Constituency in the Western Region.

Giving the ruling in court, presided over by Justice Edward Asante-Amoako ordered the NPP and the Electoral Commission (EC), first and second defendants respectively, to suspend the holding of any election in the constituency until the final determination of the matter.

.
The date for the hearing of the second part of the case now depends on the counsel for the two parties, who must agree to fix a date to tender in documents in evidence to support their cases.

However, according to some of the party supporters, the action by the aspirant to go to court to clear himself had dented the image of the party.

“As electoral area coordinators, we could not fathom why the national executives who suspended the aspirant should allow him to seek redress in court,” they indicated.

Speaking on behalf of the demonstrators, Anthony Gyaabeng, ‘Kwesimintsim Proper’ Electoral Area Coordinator alleged that Mr Mensah was suspended partly because he held a questionable party membership card though he     claimed to be a genuine party member.

“The disqualified aspirant, having taken the party to court, has breached the party’s constitution and so we expect appropriate sanctions be meted out to him,” he alleged.

He stated that “with about 10 months to go for the general elections, the Kwesimintsim NPP is yet to get a candidate and this can affect our chances.”

According to him, Mr. Mensah claimed to be one of the party's patrons in the Western Region but had been unable to produce ample evidence to prove his claim.

“Again Joseph Mensah claimed to have paid his dues to the national headquarters of the party but had never paid any dues at the regional and constituency offices of the party.

“The National Steering Committee subsequently upheld the petition brought against his eligibility and suspended him,” he asserted.