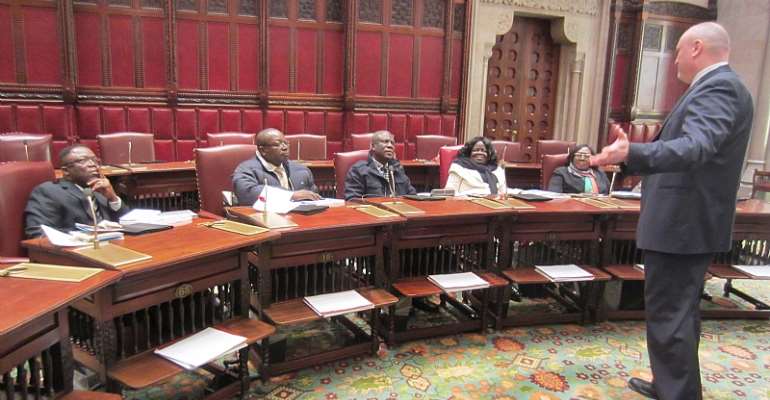 A five - member Ghanaian Parliamentary delegation has visited the New York State Senate at Albany to acquaint itself with the operations of the Senate and how it's business is organized.

Mr. Thomas Havel, a staff of the Senate Finance Committee briefed the delegation about the various working procedures at the Senate, reports of the Select Committees, Consideration of bills, Executive budget, Finance Committee and other working systems, relations between the Senators and their interaction with the public.

The Ghanaian delegation asked pertinent questions related to their work as MPs, especially how the work of the Senate is organized.

Earlier, the members were conducted round the historic Senate building with it's 50- foot tower capped by a dome, and how the beautiful architectural designs had been maintained over the years. The Senate was completed on January 1, 1899, after 32 years of construction at a cost $25 million.

On behalf of the delegation, Mr. Bandua expressed gratitude for the hospitality accorded the Ghanaians, the useful interaction and information materials presented to them. 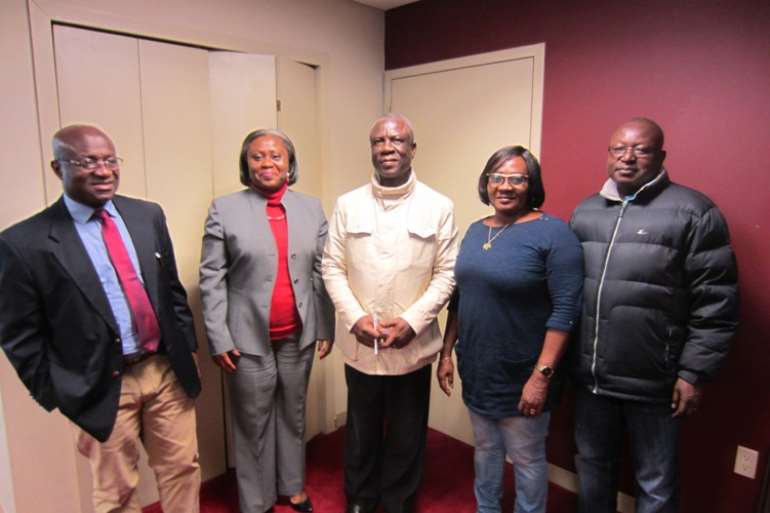 ven though the procedures in Ghana's Parliament differed slightly, he said the two legislative bodies offered the same services to the people, saying that they will take with them the usefulness lessons learnt.

Mr.Nicholas Parrella, Director of Students Programs, said the Senate was very happy with the visit by the Ghanaian MPs and hoped that the relationship established will continue.

Shortly on arrival in New York on Thursday, (January 21, 2016) the delegation called at the Ghana Mission in New York, where Ghana's Permanent Representative to the United Nations, Ambassador Martha Ama Akyaa Pobee, welcomed and briefed the MPs on the workings of the Mission.

She touched on the Sustainable Development Goals adopted by the world leaders at the UN SDGs Summit on September 25, last year and the need for Ghana to work on their implementation.

"This is particularly important even at this time that our President, His Excellency John Dramani Mahama has been appointed by the UN Secretary-General as the co-chair of the SDGs Advocacy Group that will generate momentum and commitment to achieve the SDGs by 2030", Ambassador Pobee stated.

Ghana is in a very good standing at the UN, Mrs Pobee maintained, adding that the Mission will therefore continue to work very hard in order to always put Ghana's best foot forward.

On behalf of the delegation, Mr. Osei-Kyei-Mensah Bonsu briefed the Ambassador about the purpose of the visit and workings of the Business Committee.

The delegation was then taken on a tour of the United Nations headquarters in New York, by Mr. R. Harry Reynolds, Head of lnformation of the Ghana Mission.

At the UN, the delegation interacted with the executives of the UN Social Recreation Club, (UNSRC), an association of Ghanaians working with the UN, during which Dr. Patience Stevens, the president, Mr. Julian Otinkorang, her Vice and Mr. Ben Malor, Ex-president of the club took turns to tell the MPs about the modest contribution of the club towards Ghana's development and how to advance it.