Winners And Losers Of Republican Debate 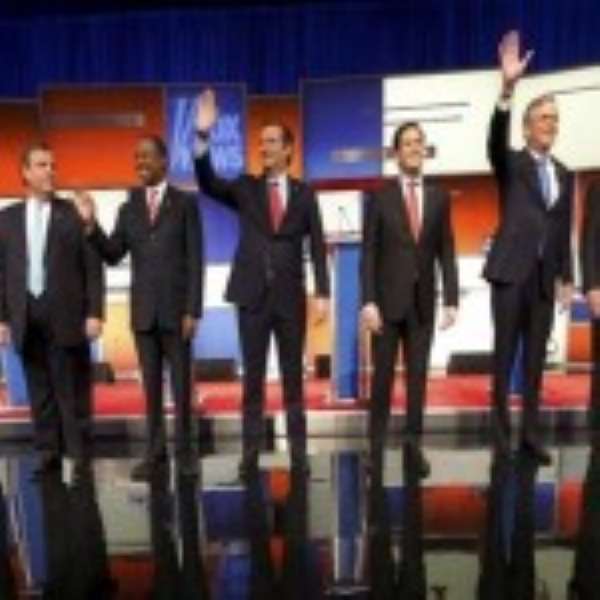 So this is what a Republican debate would have looked like in an alternate universe, where Donald Trump was still a reality show celebrity and a failed steak salesman .

With a few notable exceptions, all the candidates kept their balance and stayed on their talking points. It’s as if the unconventional Trump’s absence from the hall made everyone a bit more restrained and, well, political.

But this was still a debate, and every debate has winners and loser, so here they are. Winners Jeb Bush

Hello there, stranger, where have you been for the last 12 months? The former Florida governor is still not the most skilful debater, but without Trump around to constantly kick proverbial dirt in his eyes, he gave his best performance of the campaign. He practically admitted as much when he sarcastically noted that Trump was “a little teddy bear to me” and they “had such a loving relationship”.

Best moment: When asked about a “culture of hatred” directed toward Muslims, he said: “We’re never going to win elections unless we have a broader, unifying message”. This was big-tent Bush, the kind of campaign he said he wanted to run but hasn’t been able to.

Biggest stumble: It’s perhaps telling that his worst moment was still pretty good. During the debate’s biggest conflict, over immigration reform, he stood by his position on giving undocumented migrants a pathway to permanent residency. That probably won’t help him with rank-and-file Republicans, but disavowing his previous stance wouldn’t have either. Chris Christie

Since being temporarily relegated to the undercard debate, the New Jersey governor has managed to string together several strong debate performances. He’s a winner because, like Bush, he was best able to shine in Trump’s absence. His forcefulness, whether talking about Hillary Clinton or national security, comes across in much sharper contrast when the New York billionaire isn’t there to steal his thunder.

Best moment: The immigration portion of the debate was pivotal for many of the candidates, and it was tailor-made for Christie to contrast his executive experience as governor. After Marco Rubio and Ted Cruz struggled to explain their sometimes contradictory records on the issue in the Senate, Christie pounced: “I feel like I need a Washington to English converter” to understand Rubio and Cruz. He added that governors can’t hide behind “parliamentary tricks”.

Biggest stumble: Christie was asked about the Bridgegate scandal and, despite it hanging over his head all campaign, he simply doesn’t have a convincing answer. His offering, “I knew nothing”, is not what you want to hear from a man who brags about being a take-charge leader. Donald Trump

If Trump loses the Iowa caucuses, his decision to skip this debate will likely be labelled a mistake. At least for now, however, it looks like he made it through the evening unscathed. Save for a few gentle jabs, he largely avoided attacks from the debaters and dodged the sharp questions from moderators that bedevilled other candidates.

Cruz and Rubio faced video clips of their past conflicting statements on immigration reform – and surely Fox had one ready to roll for Trump, as well. Instead, the New Yorker got to hold court at his own rally, carried live by other news networks, and was even joined on stage by fellow candidates Mike Huckabee and Rick Santorum. Treading water Marco Rubio

The Florida senator is never going to have a bad debate – he’s just too polished for that. This was Rubio’s weakest performance, however. He got bogged down with the immigration question, and his back-and-forth with Cruz on national defence was awkwardly sidetracked when he mentioned he had once accidentally mispronounced Dabiq (the propaganda magazine of the so-called Islamic State group) in Syria as Dubuque, a town in Iowa.

Best moment: Rubio scored his best line when, after a Cruz joke about leaving the debate if he kept being attacked fell flat, he quipped: “I’m not leaving this stage, no matter what you ask me.”

.
Biggest stumble: Rubio was damaged the most by, of all people, Bush – the man who so feebly attacked him in an earlier debate. After Rubio tried to explain his past support for immigration reform, Bush went for the kill: “He cut and run because it wasn’t popular amongst conservatives, I guess.” Bush then contrasted Rubio’s dissembling with his own willingness to stick with his principles. If Bush is going down based on his immigration position, he seems eager to pull Rubio into the abyss with him. John Kasich

Kasich didn’t have a bad debate, but he was once again largely absent from the evening’s biggest moments. As a current governor and former leader in Congress, he has a firm grasp of policy details, and it shows. If he’s going to make a move in the next few weeks, however, there are a lot of bodies he’ll have to climb over. He seems to have made the decision over the course of the past few debates that, win or lose, he’s just not going to do that.

Best moment: Kasich was once again asked about his support for expanding federal Medicaid coverage for the poor in his state, an issue that is anathema to much of the conservative base. He turned it into a defence of his state’s treatment of drug addicts and the mentally ill. “When I study scripture,” he said, “I know that people who live in the shadows need to have a chance.”

Biggest stumble: The one time Kasich was really forceful was when he got into a spat with moderators Chris Wallace and Megyn Kelly. After several unsuccessful attempts to keep talking through their efforts to change the topic, he finally relented. “I’ve always listened to you, Megyn. Go ahead.” Rand Paul

The Kentucky senator nearly merits being put in the winning column just because, after missing out on the prime-time debate earlier this month, his poll numbers got him back on the main stage. But, like Kasich, he simply lacked a breakthrough moment for a campaign that desperately needs one. He mixed it up with both Cruz and Rubio at times, but he failed to make any of his attacks stick – and it’s unclear who he most needs to take down in order to succeed at this point.

Best moment: Paul finally had the opportunity to talk about criminal justice reform, an issue near to his heart. “The war on drugs has disproportionately affected our African-American community, and what we need to do is make sure that the war on drugs is equal protection under the law and that we don’t unfairly incarcerate another generation of young African-American males,” he said. It was a glimpse of the Rand Paul that many thought would flourish this campaign but has largely been absent.

Biggest stumble: Paul was asked about President Bill Clinton’s past infidelities. He said that if a head of corporation had behaved similarly, he would have been fired, never again hired and “shunned in their community”. A fact check would likely render that view false. Losers Ted Cruz

The Texas senator is touted as a championship-calibre debater, but he seemed off-balance almost the entire evening. He spent too much time complaining to the moderators about the tenor of their questioning and many of his planned one-liners were clunkers. Expectations were high for Cruz to dominate the proceedings without Trump on the stage, but it almost seemed as though he were lost without the man he’s sparred with for the past few weeks.

Best moment: Cruz is against corn ethanol subsidies, which is a very unpopular position to have when you’re vying for a win in the Iowa caucuses. Not surprisingly, he was asked about his stance, and he turned it into a defence of his tax plan. “I don’t believe that Washington should be picking winners and losers,” he said. “And, I think there should be no mandates, and no subsidies whatsoever.” It may lose him votes in Iowa, but after being criticised by Paul earlier in the debate for his preference for political expediency, it was a principled stand.

Biggest stumble: Cruz complained when he wasn’t given a chance to respond after being mentioned in one of Wallace’s questions. “You don’t get 30 seconds to respond to me,” Wallace snapped. “Sir, I know you like to argue about the rules, but we’re going to conduct a debate.” And so it was that the sharpest burn of the night didn’t come from a candidate. Ben Carson

It’s hard to label Ben Carson a loser. At this point, he’s a category unto himself. He referred to Russian President Vladimir Putin as a “one-horse country” and seemed surprised when he was asked about immigration. “Oh, great,” he said to audience laughter. He ended the debate by reciting the preamble to the US Constitution, but messed up a word. He disappeared for vast stretches, and while in the past he’s seemed to rise in the polls despite performances like this, he’s now settled toward the bottom of the pack.

Best moment: “You’re not going to hear a lot of polished political speech from me,” he said in his opening remarks. Truer words have never been spoken.

Biggest stumble: Everything after that.
-bbc