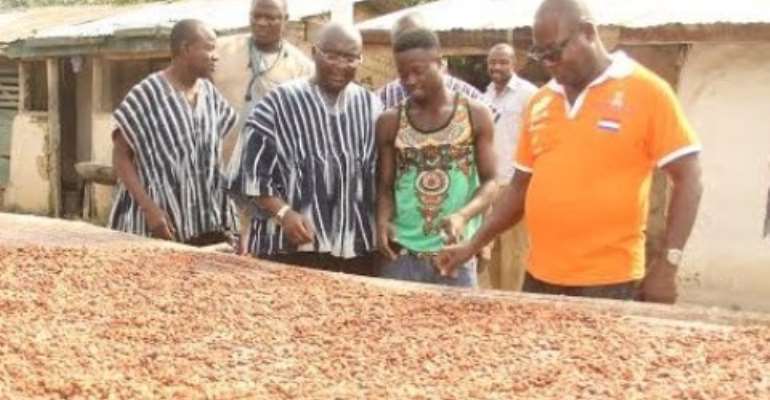 Government has rejected accusations by Vice Presidential candidate of the opposition New Patriotic Party (NPP) Dr. Muhammadu Bawumia, that the cocoa sector has seen a nosedive under the current John Mahama administration.

The running mate to NPP’s flagbearer Nana Akufo-Addo during visit to some cocoa growing areas in the Western Region, accused government of failing to grow the cocoa sector.

“The cocoa industry itself in Ghana is collapsing. If you look at the cocoa sector in the Ivory Coast and you look at Ghana, there is a clear difference in how the sector is going. Under President Kufuor, the NPP raised cocoa production from 341,000 tonnes to about 700,000 tonnes by 2008. Thanks to the good work of the NPP, cocoa production hit the historic 1 million mark in 2010/2011. This was due to policies like the mass spraying and fertilizer subsidy programmes as well as other policies,” he noted.

But in an interview with Citi News, a Deputy Minister of Trade and Industry, Muntalla Mohammed, said the figures produced by COCOBOD do not support the case of Dr. Bawumia.

He insisted that “Dr. Bawumia doesn’t know what he is talking about.”

Muntalla Mohammed argued that under the NPP, fertilizers were sold to cocoa farmers “and you even need a chit to be able to buy it” but under the NDC government such farm inputs “are given to farmers for free.”

Cocoa farmers have often accused successive governments of politicizing the support they offer to them.