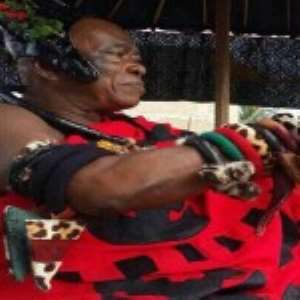 BANTAMAHENE, BAFFUOR Asare Owusu Amankwatia V, the traditional warlord of the Asantehene, has joined his ancestors.

The powerful chief, who had been very ill lately, passed away at the   Korle-Bu Teaching Hospital in Accra early this week.

As tradition demands, the chief's transition to eternity has been announced to his overlord, the Asantehene, Otumfuo Osei Tutu II.

Some prominent chiefs in Asanteman officially made the sad disclosure to the Asantehene at the Manhyia Palace in Kumasi Thursday morning.

Otumfuo, who later in the day chaired Asanteman Traditional Council meeting at the palace, also announced the Bantamahene's death to the members.

Speaking on behalf of the Asantehene, Nsuoase Poku Agyeman, Otumfuo's Chief Linguist, expressed sorrow over the passing on of the Bantamahene.

.
He announced that the Asantehene could not adjudicate cases pending before the Council on the day because Asanteman had lost a prominent chief.

The Bantama stool is one of the powerful stools in Asanteman. The occupant of the throne is the traditional warlord of the Asantehene.

Meanwhile, Otumfuo Osei Tutu II has announced to the Asanteman Traditional Council that he would travel abroad in February for a short visit.

The king did not disclose the destination and the purpose of his visit but explained that he would return to the country not long after.

Otumfuo said in his absence, Daasebere Osei Bonsu, the Asante Mamponghene, would take charge of Asanteman.

He pointed out that the Kumasi Traditional Council would also be in the care of the Asokore Mamponghene, Nana Boakye Ansah Debrah (Nifahene of Kumasi).