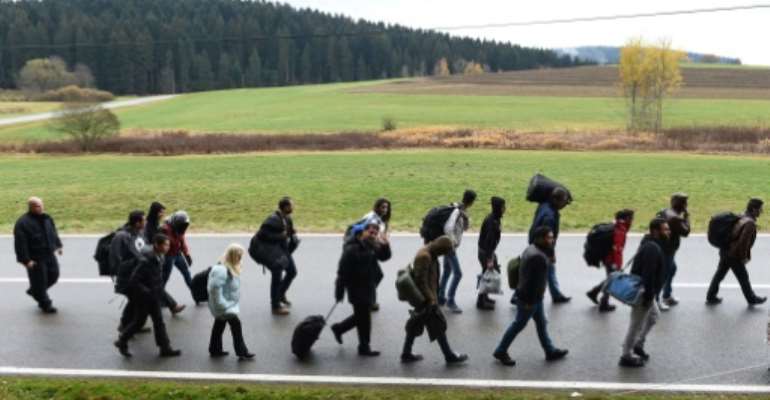 Migrants on the road after crossing the Austrian-German border near the Bavarian village of Wegscheid, southern Germany on November 9, 2015. By Christof Stache (AFP/File)

Berlin (AFP) - Germany's coalition partners agreed new measures Thursday to tighten asylum policies in an effort to stem an unprecedented influx of migrants, notably by making it easier to send back arrivals from North Africa and by delaying family reunifications.

The measures are part of a package announced by Vice Chancellor Sigmar Gabriel, leader of the Social Democrats, after a meeting with Chancellor Angela Merkel of the Christian Democrats and Horst Seehofer of Bavaria's Christian Social Union.

The tough new restrictions are intended to reduce the number of asylum seekers in Germany, which saw an influx of around 1.1 million migrants and refugees in 2015.

Under the new rules, some migrants will be blocked from bringing their families to join them in Germany for two years, Gabriel said.

The measure would apply to migrants who currently qualify for so-called "subsidiary protection", a status just below that of refugee which is granted to some rejected asylum seekers who still cannot be expelled because they risk torture or the death penalty in their own country.

The move is expected to also affect some Syrians who had enjoyed an almost automatic right to asylum in Germany but for whom individual scrutiny of their applications was reintroduced on January 1.

Germany will also add Algeria, Morocco and Tunisia to the list of "safe countries of origin", Gabriel said, meaning that their nationals would have little chance of winning asylum.

The different measures "are there and can very quickly be presented to the cabinet," Gabriel added.

Berlin hopes that the measure will curb the number of migrants from North Africa, who have arrived in increasing numbers in recent months.

Germany has already classified Albania, Montenegro and Kosovo as safe, after tens of thousands of asylum seekers arrived from there.

The arrivals have since dropped as a result of media campaigns in those countries to explain that the chances of obtaining a residency permit in Germany were minimal.

Calls have multiplied in recent weeks to step up expulsions of migrants from North Africa after a rash of sex assaults in Cologne on New Year's Eve blamed by police partly on Algerians and Moroccans.

The attacks had coincided with a sharp rise in asylum requests from those countries.

Berlin is also pressing Algiers and Rabat to take back their nationals who have failed to win asylum, to free up resources to deal with bona fide refugees.