Samia accuses Dr Delle of working against her presidential bid 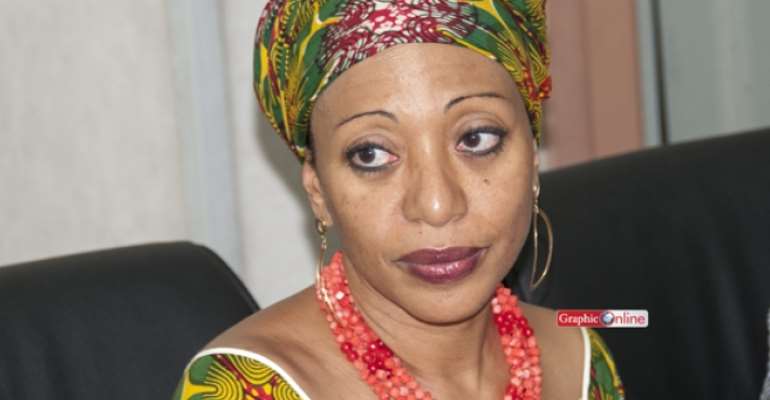 Presidential hopeful on the ticket of the Convention Peoples Party (CPP), Ms Samia Christina Yaba Nkrumah, has sent an open letter to the party's national chairman, Dr Edmund Delle, accusing him of working against her candidature ahead of Saturday's presidential primaries.

Members of the CPP will on Saturday converge on the Ghana International Trade Fair Centre, La in Accra to elect a presidential candidate for the 2016 election.

Ahead of that, Ms Nkrumah thinks the party's chairman has exposed himself as 'one of the rabid anti-Samia Bashers who are hell-bent to frustrate her efforts at the coming party congress.'

Dr Delle in a publication of the Today Newspaper of January 21, 2016 was quoted as saying, 'the Convention Peoples Party (CPP) is not a sanctuary for the children of the late Dr. Kwame Nkrumah the Party's founder,' and subsequently expressed doubts as to whether Dr. Nkrumah left the party for his children.

Responding to those assertions in an open letter to Dr Delle and dated January 27, Samia Nkrumah said Dr Delle's assertions have deepened the concerns of some committed members of the party who suspect he has bad intentions against Ms Nkrumah.

'…that obnoxious assertion hides your true intentions of conspiring with other members of the party to adversely damage the chances of Samia Yaba Nkrumah one of Dr. Nkrumah's children in her bid to contest the party's flag bearership position in this year's (2016) general elections,' the letter said.

Ms Nkrumah, the daughter of Ghana's First President Dr Kwame Nkrumah, has already indicated that her mission is to achieve her father's unaccomplished seven-year development vision for Ghana and adapt it to today's changing circumstances.

She said Dr Delle's interview with the newspaper was an indication that, 'belies' his often 'touted claim that you have come as a leader, a unifier, a Pacifist, a Peace maker whose main objective is to unite the fragmented front of the Nkrumahist /CPP family.'

'May your tenure in office as the new leader and national chairman for the CPP be devoid of controversy and rancor,' she concluded.

The letter was signed on her behalf by Comrade Kwame Wiafe, a Member of the Council of Elders of the CPP.

Follow @enochfrimpong
Writer's email: This email address is being protected from spambots. You need JavaScript enabled to view it.

Below is a copy of the letter
OPEN LETTER TO MY DEAR COMRADE DR.EDMUND DELLE NATIONAL CHAIRMAN AND LEADER OF THE CONVENTION PEOPLES PARTY

Please permit me to comment on your recent interview which you granted to one Mr. K. Agyapong and which was published in TODAY's news paper (see page 8 of publication of 21st January,2016 volume 13 No.763 edition)in which you are quoted as asserting that the Convention Peoples Party (CPP) is not a sanctuary for the children of the late Dr. Kwame Nkrumah the Party's founder and that you doubted whether Dr. Nkrumah left the party for his children .

That publication to my mind, has raised some serious doubts in the minds of sections of the general reading public and has also deepened the concerns of some committed members of our party who suspect that, that obnoxious assertion hides your true intentions of conspiring with other members of the party to adversely damage the chances of Samia Yaba Nkrumah one of Dr. Nkrumah's children in her bit to contest the party's flag bearership position in this year's (2016) general elections .

For the purposes of greater clarity, therefore and the removal of any doubt's and ambiguities in the minds of those committed members of our party preparing to cast their votes at the next party congress, it is important that you issue a public statement to clarify the true position.

In our society today, where local newspaper reporters are often accused of quoting interviewees 'out of context' ostensibly to sensationalize tit-bits of information they publish your article as it stands exposes you as one of the rabid anti-Samia Bashers who are hell-bent to frustrate her efforts at the coming party congress .

The article also belies your often touted claim that you have come as a leader ,a unifier ,a Pacifist ,a Peace maker whose main objective is to unite the fragmented front of the Nkrumahist /CPP family.

By virtue of your association with the CPP and its history, you know too well that nowhere in the late Osagyefo WILL did he WILL the party to his children.

Besides the late Madam Fatia Nkrumah was your mother in law by virtue of your marriage to one of her Egyptian housemaids. You are therefore in an intimate position to offer a more accurate information about Osagyefo's will to his children. You should therefore be the last person to join in the vicious smear campaign of vilification aimed at assassinating the Character of Osagyefo's children.

Even more discrediting and insulting to the name and image of Osagyefo's children and also to our party's relationship with them is the erroneous impression you have sought to create in the minds of the general public that Osagyefo's children have sought and found sanctuary in the party in the aftermath of their father's death. You and I do know that it is precisely the presence in the party of vicious character assassins that has kept Osagyefo's Three (3) Sons away from participating in the affairs of the party which their father founded.

Dear Comrade I think you owe the Party and Osagyefo's children an unqualified apology by willfully allowing yourself and your standing in the party to be ignobly exploited by some vociferous anti Samia elements in our party.

Our society is not like the USA where a Kennedy or a Bush can institute a political dynasty for their families or where a Mrs. Clinton can aspire to succeed her husband as President .Neither is our society like Canada where the son of the late Trudeau can succeed his father, nor like India where a daughter can succeeded her father as Prime Minister.

The CPP the first mass political party to be formed in Africa, south of the SAHARA was never instituted like the British monarchy or the Ghanaian paramountcy or kinship where the line of succession has been pre-ordained by centuries of customary and traditional practices. If it where so, Samia could not have attained the lofty heights she occupies in our party today. Her position by birth in the line of succession in her father's dynasty, in a largely conservative and male dominated society like ours would have marked her down as inferior . To succeed in the top echelons of our party today, demands total commitment loyalty and the dedication to core party principles and objectives.

Our party abhors the sinister activities of Janus-faced ,lip service men and women, opportunists and money grabbing elements who profess their loyalty to Nkrumahism but go behind the party to serve the mammon God of deceit ,treachery ,graft and political infidelity.

It is in this context that meteoric rise of Samia to political prominence in contemporary Ghanaian politics should be assessed and judged . She's rosed to her present level not because she is merely Dr. Nkrumah's daughter. She should be assessed as a woman with great determination committed to hard work in order to succeed in this largely conservative chauvinistic society of Ghana. What is therefore so objectionable about her effort? You and I should therefore respect her right and liberties as a Ghanaian individual struggling to succeed where others have failed and not simply because she happens to be the late Osagyefo's daughter .

My dear Comrade in your new role as leader of our party, your should at all times endeavor to remain an impartial arbiter in all intraparty disputes to avoid being boxed inadvertently into a new AFOKO corner .Please be always reminded that Samia's return to Ghana was partly orchestrated by a Cabal of political power brokers in our party who saw in her the opportunity to mold her into a money minting machine to manipulate and exploit in order to make wealth . They saw in her a new race horse with a popular name, a beauty queen with a charming personality and a potential chief mourner to preside over the funeral of a fallen national hero with a great potential to be exploited and manipulated . She was quick to see through this political chicanery and has refused to play their game accordingly . Today Samia has matured into a political figure in her own right . Her four years stint in parliament coupled by her two term experience as national leader and chairman of our party has adequately prepared her for the leadership position she is aspiring to reach . She must therefore be judged by her political achievements and not criticized because she is the daughter of the Late Osagyefo Dr. Kwame Nkrumah.

One of Samia's greatest achievement for the CPP in the resolute and uncompromising battles she has wages in defence to our party unique political identity and independence from being submerged and subordinated to spurious ideologies of an opposite or parallel nature. It is an ongoing struggle in Samia won support from and the admiration of the majority of party faithful. She also made some formidable enemies for herself both from within our party and from outside it. As successor to her leadership the choice whether or not to continue from where she left off is entirely yours. Be assured however that your success or failure as the new leader will be measured by the progress you make in this all important ideological in the party.

One more thing my dear comrade , the uncertain status of Mr. Onzy Nkrumah who claims to be one of Osagyefo's son's and also born to another woman of Egyptian nationality continues to give the party real cause for concern . In your capacity as party leader, it is your responsibility to help reveal the real identity of Onzy. Is he truly Osagyefo's son?is he a Ghanaian citizen under our existing nationality and immigration laws?. Cant you use your special relation as the former husband of an Egyptian citizen to provide information to establish the true identity of this Onzy man?

Onzy's association with our party makes him a lose canon ball that can explode in our faces. His uncertain status in Ghana , constitutes a threat to national security . His nack for regularly appearing at our public party functions and seeking to ingratiate himself with party members who often feel unsure of how to relate to him gives real cause for concern .

Even more embarrassing was his recent brazen attempt to contest the party flagbearership position hopefully to become Ghana's next president ,an attempt which constitutes an insult to our party's image and the nation . The fact that he also presented a dud cheque to pay for his nomination forms coupled by the presence in our party, by some unknown supporters who came to cheer him up ,some of whom are known convicted drug addicts would seem to suggest that Onzy has the potential to drift into the twilight world of criminals . Why was he also later encouraged to pay for his nomination forms in cash 24 hours after nominations had closed ? And why hasn't anybody in the party questioned Onzy's conduct in all these instances of malfeasance?

By virtue of your special status, as the late madam Fatia Nkrumah's son in law ,please seek support from the national security and also from the Ghana foreign service to investigate Onzy, For as long as his true identity remains uncertain , Onzy should be declared a persona-non-grata and should also be restrained from attending public and private party meetings .

May your tenure in office as the new leader and national chairman for the CPP be devoid of controversy and rancour .

Follow @enochfrimpong
Writer's email: This email address is being protected from spambots. You need JavaScript enabled to view it.