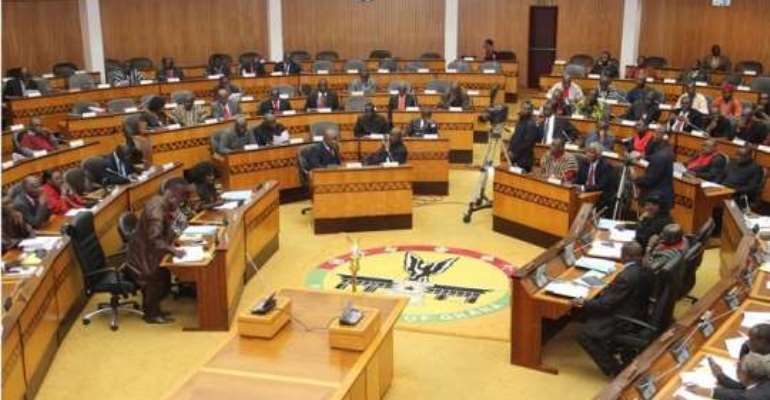 Accra, Jan. 28, GNA - Parliament on Wednesday took strong exception to delays in the implementation of projects under the Ghana Education Trust Fund (GETFund) and the lack of monitoring of such projects to ensure that the resources committed were judiciously used.

Contributions from both sides of the House stressed the need for more effective mechanisms to monitor projects in order to forestall the misapplication and waste of public monies.

The concerns were raised in reaction to the contents of the Report of the Public Accounts Committee (PAC) on the performance of the Audit Report of the Auditor-General on the GETFund funded infrastructural projects in the public tertiary institutions.

The House noted that procrastination of the Ministry of Finance in the release of funds to such projects was the bane of timely delivery of infrastructural projects, much to the detriment of the smooth running of academic programmes in the nation's tertiary institutions.

The deliberations on the report has come in over two years since the report was presented to the House in November 2013 in accordance with Article 187 (2) and (5) of the 1992 Constitution of the Republic of Ghana.

Pursuant to Order 165 (2) of the Standing orders of the Parliament of Ghana, the report was referred to the PAC for examination and report.

Media reports on the 2010 Auditor-General's report bemoaned the unstandardized infrastructural designs of GETFund funded projects resulting in cost disparities, in addition to the GETFund being cited as not being party to the contract awarding processes in beneficiary tertiary institutions from which claims for payment despite the GETFund being held liable for contractual breaches.

The Auditor-General's report noted also the poor management of spending by the GETFund attributed to the lack of project due diligence and the absence of monitoring and evaluation of projects and programmes.

The Committee observed that from 2005 to 2013, monthly disbursement into the Fund was usually in arrears between two and nine months, a situation that contravened the GETFund Act.

The report quoted the Administrator of the GETFund as saying that the sluggish disbursement into the Fund was the single most constraining factor confronting the GETFund in ensuring efficiency, cost effectiveness and timely delivery of projects.

'The Committee considers this perennial situation as unacceptable and therefore urges the Ministry of Finance to ensure that the accumulated arrears owed the GETFund is paid as early as practicable'.

Other breaches, the Committee noted were the lack of the absence of legislative instruments which would indicate in details the specific functions and activities to be taken by the GETFund Secretariat in managing the Fund, lack of proper planning and budgeting for projects, price fluctuations in constructing materials, interest on delayed payments, constant variations in prices without consideration to original cost of projects, and mismanagement of project quality.

The Committee's report stressed the contribution of qualitative infrastructure to the provision of quality education in the nation's development agenda and called on the Ministry of Finance to make timely releases into the Fund.

At the end of the debate the Speaker, Mr Edward Doe Adjaho directed that a copy of the votes and proceedings for the day and the Committee's report be made available to the Ministry of Education.