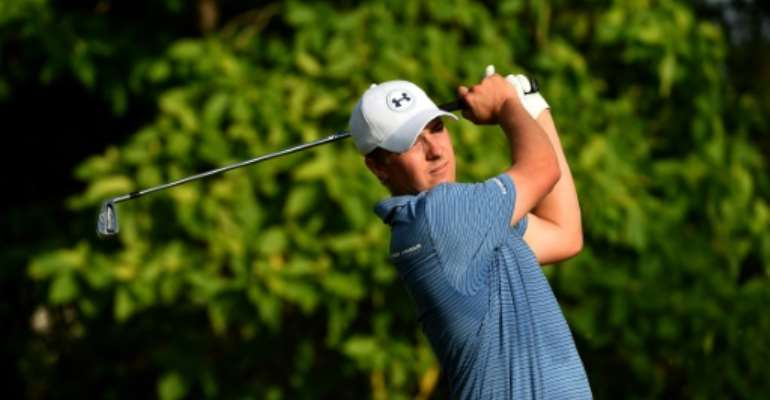 Jordan Spieth trails leader Keith Horne by a single stroke after the first round of the SMBC Singapore Open on January 28, 2016. By Paul Lakatos (Lagardere Sports/AFP)

Singapore (AFP) - South Africa's Keith Horne shot a five-under-par 66 to lead the SMBC Singapore Open after the first round on Thursday, with world number one Jordan Spieth breathing down his neck.

Spieth and South Korea's An Byeong-Hun posted identical birdies in the fourth, seventh, 10th and 18th holes, to trail Horne by a stroke as the four-day tournament teed off at the Sentosa Golf Club Serapong Course.

Bad weather forced a suspension of play late afternoon and competition will resume tomorrow for 57 players who have not completed the first round.

Teeing off on the back nine, Horne hit two bogeys but raised his game to top the leaderboard with his seventh birdie in the final hole.

Despite not playing at Serapong for a couple of years, the 44-year-old said he usually has a good outing at the course.

"I had a bit of a walkabout in the middle of the round but then I also had a good run coming in," said Horne.

"I putted great today which was important. I put a new driver in the bag... and I hit it so far and straight and that made a huge difference."

Playing in the city-state for the first time, Spieth remains focused on winning the Singapore Open but he was frustrated with his drives, but the 22-year-old Texan said he was still adjusting.

"I wish I had better chances of putting inside 15 feet to birdie. I just didn't have many today," he added.

"But that will come. It's just the first round in a different country, different time zone. It's still an adjustment and I think each day it will get a bit better."

Overall, Spieth said Serapong lived up to what he had heard from PGA Tour pros who had played here previously.

"My expectations were high, considering how highly people have spoken of this golf course," Spieth told reporters.

"It played very similar to a pretty challenging PGA Tour."

The American has put aside earlier complaints of exhaustion after a top five finish at the Abu Dhabi HSBC Golf Championship on Sunday.

Returning after a three-year hiatus and under new sponsorship, the Singapore Open offers a minimum prize purse of $1 million. It is co-sanctioned by the Asian Tour and Japan Golf Tour Organization.

It was formerly one of Asia's richest with a $6 million purse when last held in November 2012.

The tournament was cancelled in 2013 after British bank Barclays chose not to renew its sponsorship. Japan's Sumitomo Mitsui Banking Corporation is the current sponsor.