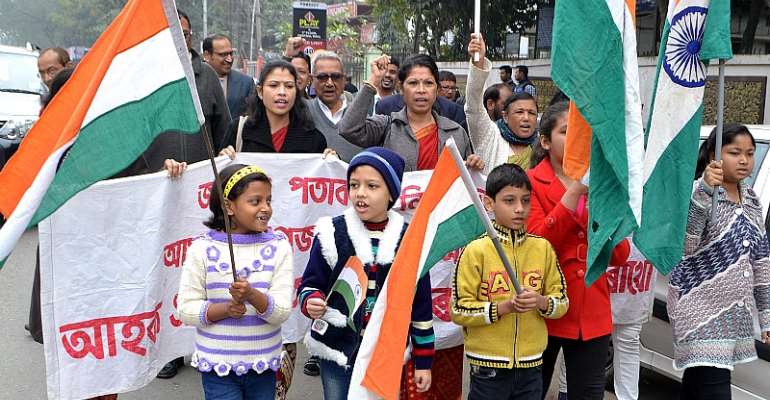 Guwahati: The residents of northeast India, whom the mainstream agencies often misunderstand as sympathizers to various separatist militant outfits, have joined in 67th Republic Day celebrations one and all to pay heartfelt tributes to the martyrs. For the first time in recent decades, the auspicious Day on 26 January 2016 was observed without a single incident of violence across the region surrounded by Nepal, Bhutan, Tibet (China), Burma and Bangladesh.

The people of trouble-torn Manipur, Assam, Meghalaya, and Nagaland with Arunachal Pradesh, Mizoram, Tripura and Sikkim have participated in both government and community celebrations on R-Day to hoist the national flag with great fervor. They not only saluted the martyrs, who made supreme sacrifices for the motherland, but also rejected the militants’ yearly rhetoric to boycott the R-Day and Independence Day in the region.

A joint statement issued the rebels asserted that there is no reason for Western South East Asia to celebrate India’s Republic Day. They also argued that the citizens of the region should introspect and analyze Indian policy here and initiate to dislodge Indian occupation from the alienated region.

Earlier ridiculing the militants’ diktat over the R-Day celebration, the Journalists’ Forum Assam appealed to each and every patriotic resident of the region to hoist the national flag on the auspicious Day and pay homage to the martyrs. The forum argued that if the citizens do not recognize the immense sacrifice made by millions of known and unknown freedom fighters to make India an independent nation, ‘we would only turn ourselves as the most ungrateful nationals on the planet’.