Ble Goude: a 'Street General' who compares himself to Mandela 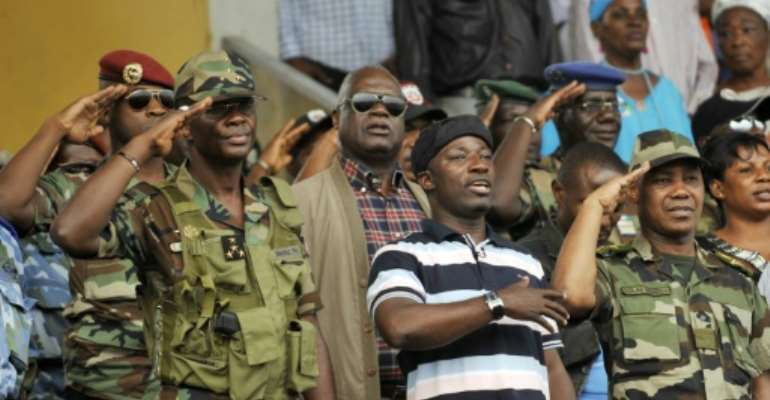 Abidjan (AFP) - Charles Ble Goude, right-hand man to disgraced former Ivorian president Laurent Gbagbo, was nicknamed "the General of the Streets" but insists he had no role in the deadly violence that has landed him at the International Criminal Court.

The 44-year-old firebrand, who is partial to bespoke suits, flashy neckties and designer African robes, faces four counts of crimes against humanity for his role in the bloody standoff that followed a 2010 presidential poll and left 3,000 people dead.

The pugnacious Ble Goude has defiantly told the Hague-based ICC that his notorious pro-Gbagbo youth group, the Young Patriots, always acted in the interests of their country and for peace.

"Where are the hate videos? I haven't seen any," the former student leader told the ICC, where he and Gbagbo go on joint trial on Thursday.

"Where do I tell the Young Patriots to stand up and go and kill Ouattara supporters?" he had said, referring to Gbagbo's election rival and current Ivory Coast President Alassane Ouattara.

"I always did everything to bring Ivorians together."

Ble Goude and his mentor Gbagbo, 70, are accused of hatching and implementing a plan to further extend Gbagbo's 10-year rule -- which saw elections being repeatedly deferred -- through a brutal campaign of murders and rapes.

According to French media reports, Ble Goude is regularly receiving visitors in his cell in The Hague, where he dresses immaculately and passes the time cooking Ivorian and African delicacies or playing football.

According to reports, he sees prison as an obligatory rite of passage, comparing himself to the likes of Myanmar's Aung San Suu Kyi and anti-apartheid icon Nelson Mandela, whose autobiography he is reading in prison.

A slight man with a powerful command of rhetoric, Ble Goude is accused by ICC prosecutors of ordering his men to murder, rape and burn alive hundreds of people during the post-electoral crisis in 2010-11.

He came to Gbagbo's notice through his capacity to rally massive street crowds, bringing tens of thousands of people together for a 2004 protest against former colonial ruler France, whom he accused of siding with rebels trying to oust Gbagbo.

"Ivory Coast is not a French department," was his rallying cry. He also accused then French president Nicolas Sarkozy of planning to wage a "genocide" in Ivory Coast.

One of Ble Goude's lawyers said he will plead not guilty and insist that he "is not a criminal" but a "man more determined than ever for truth to emerge".

"Mr Ble Goude is not a criminal like what one is trying to make people to believe," said Claver N'Dry.

Ble Goude was arrested in January 2013 in Ghana after going on the run for more than a year and a half.