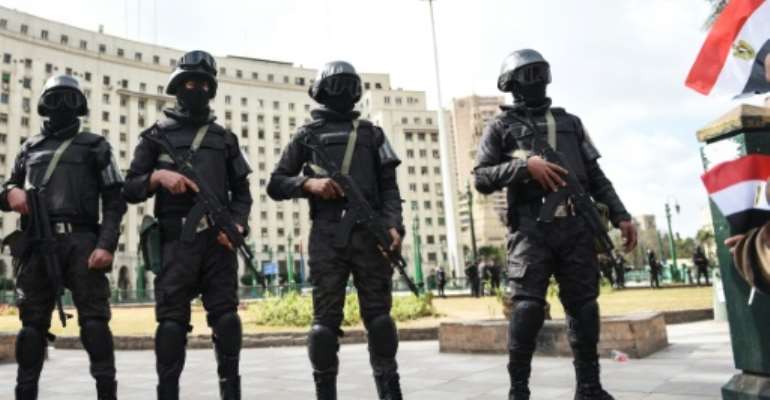 Members of the Egyptian police special forces stand guard on Cairo's landmark Tahrir Square on January 25, 2016, as the country marks the fifth anniversary of the 2011 uprising. By Mohamed El-Shahed (AFP/File)

On November 19, 2011, protests were held near Cairo's Tahrir Square against the military junta that took over after the popular uprising that January and February which ended the rule of president Hosni Mubarak.

The 10 days of protests that followed claimed 42 lives in clashes between demonstrators and security forces.

A Cairo appeals court on Wednesday confirmed two-year jail terms for the five, among them a surgeon and an activist from a small leftist party.

According to a court official and a defence lawyer, they were accused of taking part in an event in November 2015 in memory of the violence four years earlier.

In December, they were convicted of attending gatherings, blocking roads and "demonstrating without a permit", the sources said.

They can still appeal to the Court of Cassation.

Wednesday's ruling coincides with the fifth anniversary of the uprising that erupted on January 25, 2011 and led to Mubarak's fall.

Defence lawyer Anas Sayyid told AFP that the five were arrested last November "in an arbitrary manner, in an area where there were not even any demonstrations".

Since the military removed Islamist president Mohamed Morsi in July 2013, again taking the reins of power it had controlled for decades before the 2011 uprising, the authorities have ruthlessly repressed any opposition.

Limited at first to Morsi supporters, the crackdown later spread to secular and leftist movements that took part in the revolt against Mubarak.

An Amnesty statement said at least two of those convicted "say they were tortured and ill-treated during interrogation".

"Their case is one more appalling example of the relentless government campaign to crush independent and critical voices and activists in Egypt today," said the London-based rights organisation.

Meanwhile, the trial of four activists on charges of "incitement to strike", due to begin on Wednesday, has been postponed until next Monday, a judicial official said.

The defendants in that case include youth leader Amr Ali, coordinator of the now banned April 6 movement that spearheaded the 2011 revolt.