Failure of Democracy in Africa: The Case of Equatorial Guinea 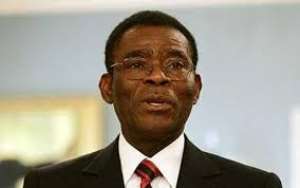 1 How Dictatorship has wreaked havoc, poverty and deprivation for the people of Equatorial Guinea

Throughout my 25 years in and out of Africa, working in international development, democratization, economic, social and political development, I have come across, time and time again, the deplorable results of bad governance, inexistent rule of law and rampant corruption across the continent. Yet, the case of Equatorial Guinea is particularly acute.

Since it only gained political independence from Spain in 1968, it is a relatively young nation, yet in its short history the country has been riddled by brutal dictatorship and extreme deprivation and poverty. After declaring freedom and independence on October 12, 1968, the political leadership at the time chose Francisco Nguema as President, who subsequently declared himself President for Life in 1972. During this time period, the subsistent agricultural rural economy generated income through exports of cocoa, coffee and timber.

Nguema was betrayed by his nephew, a low ranking military official, a man who graduated last in his class at the military academy in Zaragoza, Spain, prior to his return to what was then known as Spanish Guinea. On August 3, 1979 there was a coup d’etat after an intense struggle for power, in which this nephew, Lieutenant Colonel Teodoro Obiang became the ruler in 1979, making him now the longest dictator serving in Africa over 37 years of tyrannical rule.

After the discovery and extraction of oil in 1995 by a small Texas oil company called Walter International, which would be later be acquired by ExxonMobil, the dictatorship became even more entrenched in its brutal rule, despotic governance and reckless ruthlessness, as greed has lead the Obiang regime to use new found oil wealth to enrich the inner circle and leave the people in dire poverty. The legacy of both the uncle Nguema and the nephew Obiang has taken African kleptocracy to its greatest lows.

There is no transparency in this government, nor any accountability as to how the profits in oil revenues are being used and distributed. In point of fact, President Obiang has declared that the petro revenues are a state secret, thereby precluding the public from knowing the exact amounts filling dictatorial coffers. Meanwhile, the people of Equatorial Guinea live in extreme poverty, with no electricity, no running water and inadequate nutrition is a country that in 2013 had one of the highest per capita incomes in Africa.

These conditions are clear examples of gross negligence, specifically when dealing with misappropriation of the people’s money, particularly in a country which makes an estimated $3.3 billion dollars a month from oil revenues. With a small population of just over 700,000 and a size equivalent to the state of Maryland in the USA, it is discouraging and disheartening to see how this dictatorship has used these funds to enrich itself and squander the wealth on its own vices and whims. According to Transparency International, the country is ranked as number 172 out 183 countries in terms of being one of the most corrupt in the world.

The French Government in cooperation with the USA in 2012 seized over $4.9 million dollars of luxury goods from the son of the Dictator, Teodorín, which is only a small fraction of the close to $4 billion under his suspected control, all of which is believed to be clandestinely stashed and was secretly stolen to be placed in banks all over the world by the Obiang family and regime.

The abuses of the dictatorship have been well documented through Human Rights Watch during Equatorial Guinea’s false and rigged elections. Amnesty International has documented extrajudicial killings, torture and clandestine operations to quash the opposition. While, Freedom House has ranked the Equatorial Guinea government as one of the least open and transparent in its annual global review. Also Obiang is a constant ranking on Parade Magazine’s Worst of the Worst list. Even the US government has voiced its opposition to the Obiang regimes’ human rights abuses, killings of opposition leaders and unlawful detentions of nationals and foreign nationals.

So, at this point, one might be asking, what is the international community doing to aid a population in such dire straits, yet, there seems to be little to nothing that has been done for over 37 years against this regime. An estimated 15 percent of USA oil imports originates fromAfrica; after Nigeria and Angola, the third most important country is Equatorial Guinea. Now that globalization has pushed the oil market to a level of importance for countries like China and India, there is little political pressure from the international community to end this dictatorship and put an end to this reign of terror.

I can imagine that it is taxing on the USA, after so many challenges across the Middle East and Central Asia, to then turn to Africa and take on the dictatorships that rape, pillage and pawn their countries for fodder, but something must be done, in order to usher change on the African Continent. Equatorial Guinea is a perfect place to start, with a manageable geography, coupled with its strategic location in the Gulf of Guinea, it is a prominent trading zone in Central West Africa.

When I first began my career working in Africa, I served briefly for an advisory firm that represented the interest of dictators in Gabon, Cameroon and Nigeria, and after a short stint of pure frustration about how global politics really works, I vowed that the future of Africa was not in dictatorship. I proclaimed that I would no longer serve the interests of despots, while the people of Africa were suffering.

Well that was 22 years ago when I left that firm and unfortunately not much has changed when it comes to the crisis of democracy in Central and West Africa, but there can be a beacon of light in the small central west African nation of Equatorial Guinea. There is an opposition movement swelling across the world of citizens of Equatorial Guinea that long for true freedom, independence and democracy in their country.

Since 1991, there is a champion for human rights, democracy and dignity for the people of Equatorial Guinea and that is my fiancé, Gustavo Envela Jr. who has been fighting tirelessly, since we graduated from Stanford University together in 1990, to usher in regime change in his country, to advocate for democracy in Equatorial Guinea and to call on the USA and the global community to end the rampant rage and unaccountable scourge of dictatorship in his country and bring an end to those responsible for the dictatorial pandemic across the continent of Africa, which has infected the continent since colonialism.

We are now jointly appealing, both here in the North America as well as in Europe and Africa, to the entire opposition landscape across the world to join forces and resources in creating an environment in which democratic space will be achieved where the tenant of good governance, rule of law, respect for human rights and human dignity and mandating that free, fair, open and transparent elections be mandated as the standard for the will of the people to be expressed in Equatorial Guinea and throughout the African continent.

It is our mission to put out a clarion call to all opposition leaders and organizations globally in an effort to collaborate and cooperate to cause a ripple of pressure on the Obiang dictatorship to finally relinquish power and allow free, open, transparent and fair elections in the country, after five decades of one party, one family Nguema rule.

The future of Africa is in our hands because once one dictatorship falls the rest will follow, like despotic dominoes, so we hope to initiate an African Renaissance. The future of Equatorial Guinea will be determined by the actions or inactions that we take this year to organize the opposition movement in a massive coalition to push for elections and finally transition this ruthless, vindictive and corrupt dictatorship out of power. The will of the people must triumph. The will of all the souls that have died for true freedom and democracy in Equatorial Guinea must not be denied their victory and with the acknowledgement that they have not died in vein.

On January 26, 2016, Gustavo Envela Jr. celebrates his 48th year on earth, born in Bata-RioMuni, Equatorial Guinea, he dreams of a rebirth for himself and the country simultaneously. We feel together that there must be a new beginning for the country of Equatorial Guinea and are united in our conviction that Equatorial Guinea and the African Continent must elect more competent leadership in which the percipient focus shall be promoting, preserving, protecting the health, education and socio-economic welfare of each of its respective citizenries. This mandate is best expressed in the touching words written by Alice Walker in her poem titled, ‘To Change The World Enough.’

To Change The World Enough

To change the world enough

you must cease to be afraid

We experience your fear as the least pardonable of

humiliations; in the past

it has sent us scurrying off

the only one all of us have known

we seek the same

there is room enough

for all of us;

the very rich never seem to have heard

In us there is wisdom of how to share

we do this everyday.

or hidden in books

that claim to disclose

We must walk together without fear.

There is no path without us

Embarrasing Bossman Doesn't Fit To Be At The EC - Ahafo Com...
54 minutes ago