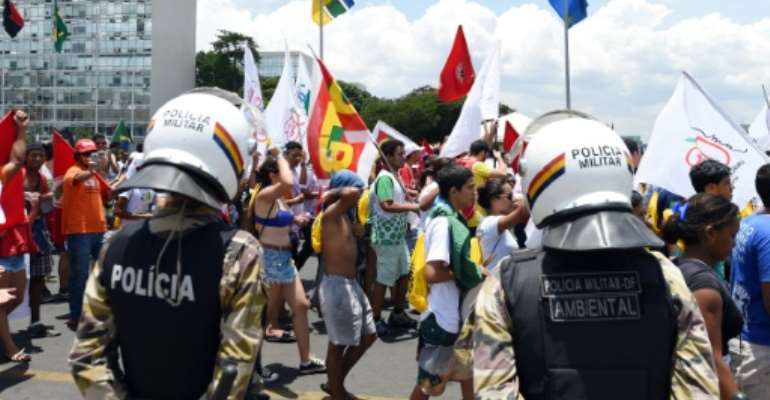 Berlin (AFP) - Brazil, plagued by a scandal surrounding state oil giant Petrobas, registered the biggest plunge on the corruption index of watchdog Transparency International, which warned that emerging economies are struggling to shake off graft.

Overall, two-thirds of the countries measured by Transparency scored below the 50-point mark out of a top score of 100.

Nordic countries -- Denmark, Finland and Sweden -- topped the chart with their clean public sectors as in previous years, while strife-torn or repressive states -- Afghanistan, North Korea and Somalia -- brought up the rear.

Emerging giants in particular showed a worrisome picture in the index used widely used as a gauge of the level of corruption by governments, legal systems, political parties and bureaucracies.

"All the BRICS are challenged, the countries that are the really up and coming in the world economy, they all score below 50 in our index," Robin Hodess, TI group director for research, told AFP, referring to Brazil, Russia, India, China and South Africa.

South Africa was in 61st place with 44 points. Brazil and India were tied in 76th place with scores of just 38, while China fared slightly worse, in 83th place with 37 points. Russia only came in at 119th, managing just 29 points.

Hodess noted that the Petrobras case has had a "tremendous impact... in the real uncovering of the way that the political networks and businesses have been covering up decades of corruption in the country".

"Things are starting to change, but this has been the scandal that brought Brazil into a difficult situation in terms of public sector perception of corruption."

The Latin American giant has been reeling over revelations that executives at Petrobras colluded with politicians and other businessmen to siphon off millions from the company through bribes and rigged contracts.

President Dilma Rousseff herself has been investigated but so far emerged unscathed, although she was Petrobras chairwoman through much of the period when the corporation was at the centre of the embezzlement scheme.

- 'Not enough political will' -

Just hours ahead of the release of the Transparency index, Malaysia's top prosecutor cleared prime minister Najib of corruption, putting a spotlight on graft strangling the country's public sector.

In the long-running case that has gripped the nation, the attorney-general said on Tuesday that a $681 million (628 million euros) deposit in Najib's bank account was a personal donation from the Saudi royal family.

Najib has for months denied accusations that the payment came from a now struggling state-owned company he launched.

"I think this case really highlights that kind of problem and the fact that while some measures have been taken, really getting to the bottom of the problem, and really working at the roots of corruption in Malaysia hasn't really been given enough political will and honest attention," she told AFP.

Malaysia scored 50 in the index and came in at 54th place, down four from last year.

TI, which uses data from institutions including the World Bank, the African Development Bank and business school IMD to compile the perceptions of the scale of public sector corruption, urged the public to prod their governments to carry out much needed reforms.

"Overall we think it's very important that not only the government comes in with the reforms we are looking for -- the policy changes, and enforcing them, but that these countries pay attention to people, to the efforts of people on the ground," said Hodess.

She cited the example of Guatemala, where protests pushed president Otto Perez to stand down last year over graft allegations.

"The people can really make a big difference in drawing attention of elites to corruption issues, and we think in the long term it would make a big impact if people are part of the solution to corruption."

I don’t know him – Afoko denies knowledge of prosecution wit...
13 minutes ago