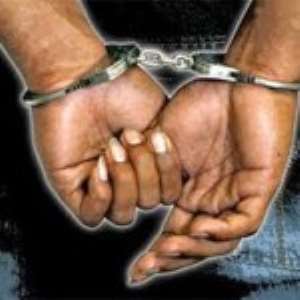 EMOTIONS ran high last Saturday at Adansi-Dompoase in the Ashanti Region after a groom was arrested right in the middle of his wedding to a banker in the community.

Augustine Antwi, who claims to be a teacher, was arrested for fraud by uniformed police officers deployed from Offinso, “moments before” the signing of the marriage certificate at the Dompoase Methodist Church.

He and his bride had exchanged vows and were getting ready to sign the certificate when two law enforcers stormed the church hall and handcuffed him to the amazement of the congregation, including relatives, and whisked him away.

Supt Amankwa, Offinso Municipal Police Commander, confirmed the arrest and indicated that Antwi was apprehended and detained on charges of defrauding by false pretences.

He told DAILY GUIDE the gentleman was placed on police wanted list after officers received reports about his nefarious activities – swindling at will with false pretences.

According to the police chief, Augustine Antwi managed to dupe his victims of several thousands of Ghana Cedis after promising them visas to enable them travel abroad.

.
The police commander added that the suspect also rented someone's car and used it for three weeks without paying, and later abandoned the car after damaging it.

“It remains packed at the police station pending further investigation into the case,” Supt Amankwa said.

Meanwhile, the female banker with the Adansi Rural Bank remains inconsolable following the dramatic event that characterised her big day.

The officiating minister, Very Rev Ebenezer Eshun, told Adom Fm's reporter, Isaac Kofi Normanyo, in an interview that the bride cried uncontrollably when the ceremony was brought to an abrupt end, adding that the lady was in shock.

Rev Eshun said he had since directed the parents of the bride to counsel her to help her recover from the shock.