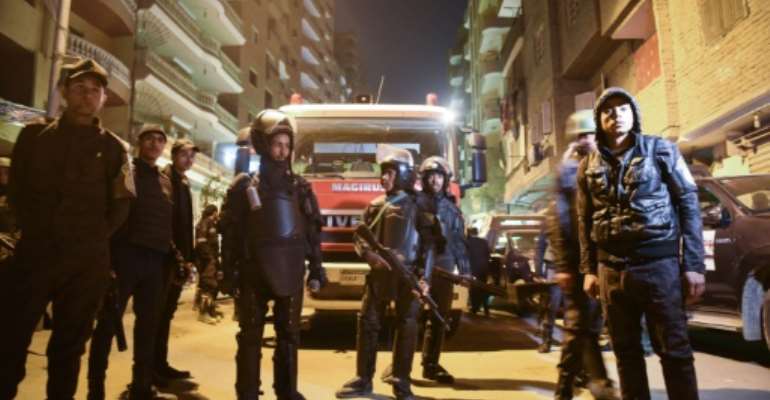 Security personnel stand guard at the scene of a bomb blast in a main street in Giza, Egypt, January 21, 2016. By Mohamed El-Shahed (AFP/File)

Cairo (AFP) - Egyptians on Monday marked the fifth anniversary of the uprising that toppled Hosni Mubarak amid tight security and a warning from the new regime that demonstrations will not be tolerated.

Police deployed on streets in Cairo including near the iconic Tahrir Square -- the epicentre of the 18-day anti-Mubarak revolt -- to head off potential protests against President Abdel Fattah al-Sisi's government.

Security was also beefed up around police stations, which were targeted by protesters during the 2011 uprising and in recent years have been attacked by militants from a growing jihadist insurgency.

A long-running security crackdown intensified in the run-up to the anniversary, with police rounding up dozens of activists and raiding hundreds of homes in recent weeks.

Activist hangouts including cafes, cultural centres and a publishing house near Tahrir square were also raided or shut down.

Critics have accused Sisi of restoring Mubarak's autocratic rule and of betraying the hopes of those who took to the streets five years ago.

"Egyptians have been made to watch as their country reverts back to a police state," Said Boumedouha, rights group Amnesty International's deputy Middle East and North Africa director, said in a statement.

"Tens of thousands have been arrested and the country's prisons are now overflowing, with widespread reports of torture and hundreds held without charge or trial."

January 25 was declared "Revolution Day" a year after the revolt in 2012 but there were no official plans to mark the anniversary on Monday.

Since Sisi installed the new regime, authorities have banned all but police-approved rallies and overseen a crackdown that has left hundreds of Morsi supporters dead and imprisoned thousands.

Several secular and leftist activists who spearheaded the anti-Mubarak uprising have also been jailed.

Morsi's blacklisted Muslim Brotherhood movement is the only group to have called for protests on Monday, but its ability to mobilise supporters has diminished.

"The January revolution still exists in all squares of Egypt and will fade only after achieving all of its goals and defeating the military coup (against Morsi)," the Brotherhood said in a statement on the eve of the anniversary.

In a speech last month, Sisi warned against any demonstration marking the anniversary.

"I am hearing calls to stage a new revolution. Why? ... I came to power with your will and choice, not against your will," he said.

Sisi, who does not belong to any political party, won a presidential election in 2014 riding a wave of popularity after ousting Morsi.

A new parliament was inaugurated earlier this month but it is dominated by pro-Sisi lawmakers and is unlikely to pose any challenge to his rule.

"It's now clear that the counter-revolution has triumphed," said Karim Bitar of the Paris-based Institute of International and Strategic Studies.

"The revolution has been confiscated and buried."

Many Egyptians tired of years of political unrest and instability support Sisi, saying there are no alternatives and that some level of stability has been achieved by his regime.

But he faces serious challenges, including reviving an economy that remains sluggish as investments and tourist revenues fall and a deadly insurgency led by the Egyptian affiliate of the Islamic State (IS) jihadist group.

Hundreds of police and soldiers have been killed in militant attacks since Morsi's ouster and security forces have so far been unable to quell the insurgency.